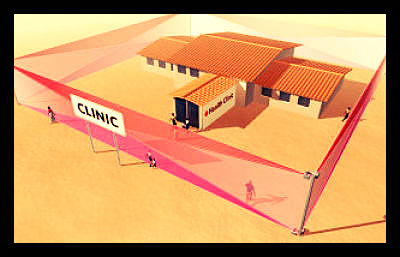 A laser defense system from the scientists at Intellectual Ventures may prove to be an effective weapon against malaria-spreading mosquitoes.

The device is known as a “photonic fence” and works by monitoring a virtual field for disturbances caused by insects. Once an intruder is properly identified as a mosquito, it is targeted with a deadly laser. Within a fraction of a second, the device shears off the bug’s wing, leaving it dead or incapacitated.

Bees, butterflies and humans need not worry, however; the software powering the photonic fence is precise. It can determine not only the type of insect but also its gender and species. This accuracy is needed because only mosquitoes of the genus Anopheles carry malaria and only females bite people. The software analyzes insect size, wing movement pattern, airspeed and other characteristics to discern friend from foe.

Naturally, the idea is not without its skeptics. One concern is that rural areas often have unreliable power grids. The scientists at Intellectual Ventures hope to solve this problem with the use of solar cells. The laser itself doesn’t require much energy, as it targets the wings of a mosquito rather than its tough exoskeleton.

Intellectual Ventures sees the device as supplementing, rather than replacing current measures of control. These include habitat destruction, nets for homes and beds, as well as pesticides. Nonlethal uses of the photonic fence are also possible, such as monitoring mosquitoes or agricultural pests so that they can be treated with more traditional methods.

The company is currently field testing the device in a partnership with Lighting Science Group. Models are not yet for sale and the so-called mosquito laser will need to be produced cheaply in order to be effective.

The device couldn’t come at a better time. Over three billion people—more than half the world’s population—are at risk of malaria worldwide. An estimated 584,000 people died of malaria in 2013, out of 198 million cases. Although the disease is present in the Middle East, Asia and Latin America, most deaths due to malaria occur in Sub-Saharan Africa. Young children are particularly vulnerable to the disease; it is estimated a child dies of malaria every minute.

Its widespread economic effects worsen malaria’s human devastation. Several studies have demonstrated a relationship between malaria and poverty, and many of the world’s poorest countries have high rates of the disease. Refugees and transient people are at heightened risk of malarial infection, as they may not have developed any immunity.