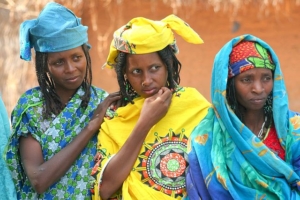 Period poverty is the lack of access to sanitary products and hygiene facilities to allow women to manage the monthly duration of menstruation properly. For many girls in Africa, having their period once a month includes negative connotations meaning they may have to stay home from school and are at risk of health issues due to a lack of access to sanitary products. Current statistics that UNESCO collected have revealed that one in 10 African girls miss school because their schools have inadequate toilet facilities – also providing them with no access to sanitary products. However, many activist groups aim to counter the effects of period poverty in Africa for women and girls.

In Ghana, data collected in 2016 showed that 95% of girls sometimes miss school due to period poverty. Within Ghana, factors that contribute to this include the taboo surrounding menstruation – with some local beliefs that menstruating women are unclean. There is also a lack of facilities within schools.

However, progress is occurring within Ghana through charities such as Dressability and Action Through Enterprise, which worked to give girls hygienic, reusable pads in a small rural area in upper west Ghana in 2021. This was due to its belief that sanitary pads are a luxury item in a post-pandemic era, and many families they have worked with struggled to send their girls to school due to not being able to afford them.

When girls in Uganda are on their period, absence from school is around 28% – a sharp increase from 7% on non-period days. Nearly a quarter of girls in the country between the ages of 12 and 18 drop out of school when menstruation commences meaning period poverty is rife within the country. Both statistics are according to data collected in 2019.

However, the government is making moves to try and tackle the issue by partnering with the Ugandan Red Cross for their ‘Keep a Girl in School Initiative,’ which gave out sanitary pads in schools there alongside partnering with reusable pad manufacturer ‘AFRIpads’ in 2019.

Around 7 million South African girls in 2022 still struggle to access sanitary products, according to the South African Minister for Women. When a Menstrual Health Management Symposium in Johannesburg occurred, reports stated that period poverty is a human rights issue that people must strive to resolve.

The Cora Project aims to support those who menstruate in South Africa by equipping them with sound knowledge regarding periods and period poverty and providing them with practical resources to combat it. In December 2020, the Cora Project gifted 100 women in various shelters across Cape Town Christmas gift boxes containing menstrual products and other goodies. Additionally, other projects occurred throughout 2020, such as the distribution of 12,000 products to in-need menstruators in Hout Bay and giving out more than 400 products on Mandela Day.

In conclusion, one can say that despite currently alarming statistics regarding period poverty in Africa, several organizations are striving to combat this to the greatest extent they can. The work that the organizations mentioned above have undertaken is evidence of a growing movement to combat period poverty in Africa for menstruators in education and broader life. By providing workshops and inclusion for men and boys to reduce period stigma and practical resources to ensure no one ends up without access to products, these groups are creating a better future for the next generation of menstruators.