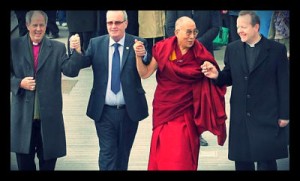 On April 18, the Dalai Lama took part in a Peace Walk on the Serpentine Pedestrian Peace Bridge in Derry, Ireland. The 70 year-old Dalai Lama was invited by Richard Moore, founder of Children In Crossfire, to partake in a major UK City of Culture celebration. Moore invited the Dalai Lama to speak at the event attended by 2,500 people and to walk across the peace bridge in order to reiterate to people worldwide that peace is the only path for the future. Moore invited the Tibetan spiritual leader to return to Derry in order to signify how far the city had come in the last decade and how it will continue to flourish. Moore said that the Peace Bridge was not the only symbol of a positive future, but the youth as well.

Accompanying the the Nobel Peace Laureate as he walked across the bridge were 300 school children singing Peace is Flowing like a River, the leaders of the Catholic and Church of Ireland dioceses, Monsignor Eamonn Martin, Bishop Ken Good and Richard Moore.

After crossing the Peace Bridge, the Dalai Lama addressed the crowds gathered at an old British army site, the Venue Arts Center. “This century should be the century of dialogue. The last century was the century of violence…Whenever you face problems, try to solve them through dialogue and talk,” said the Dalai Lama. Among his thoughts on peace and compassion, he also reiterated that it is not only political leaders, but every person’s responsibility to be accepting, compassionate and open-minded towards one another to ensure true and lasting peace.