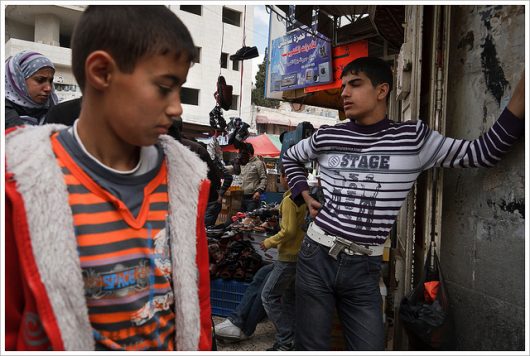 Israeli blockades, land restrictions and a drop in foreign aid have ensured that Palestine’s poverty rate remains high, according to reports from the U.N. and the World Bank. However, new Israeli policies give Palestine some hope.

Palestine’s poverty rate is at 25%, and, among the youth, it is at 56%, which is the highest youth poverty rate in the world. Unemployment is at 40%, and last year 1,100 people were left homeless. While the population has increased steadily, the economy has not improved much. Over the last decade, the GDP growth rate has not exceeded 1.44%, but the population rose by 38.4%. Additionally, the business sector has lost between 50 and 60% of their pre-2014 assets, production, exports and employment.

Israeli policy is primarily responsible for Palestine’s poverty rate. Israel has blockaded the Gaza region for the 11th year in a row.  The Israeli government has also declared a third of the arable land in the area and half of Gaza’s fishing waters to be high-risk no-go zones. Additionally, last year Israel destroyed 780 Palestinian homes.

Palestine has not received much of the foreign aid that was pledged to it. The U.S. pledged $3.5 billion in 2014 but is far behind its aid plan, as 51% of the money has been disbursed. The U.S. drew up a recovery plan, but only 17% of the $3.9 billion of the recovery plan’s funds have been allocated to financial needs in the area. Moreover, 1.6 million tons of construction materials, which is only seven percent of what is necessary, was brought to Gaza since the 2014 summer war.

Israel has taken steps to better relations in the region. The Israeli government is instituting a plan to rebuild and reconstruct Palestine to combat Palestine’s poverty rate. Israel’s Ministry of Foreign affairs reported that 100,513 homes have been repaired and that 2,733 have been rebuilt. This plan will hopefully heal the political divide in the region.

While Palestine’s poverty rate remains high, political tensions ensure a stagnant economy and there is little incoming foreign aid, there may be room for a political compromise in the future. The international community remains dedicated to easing the situation in Palestine, ending the Israeli blockade around Gaza and ending land restrictions. With the help of the international community and more support from the Israeli government, Palestine’s poverty rate could drop significantly.

The Four Common Diseases in Egypt You Need to Know What Is the Economic Growth and Development Act?
Scroll to top