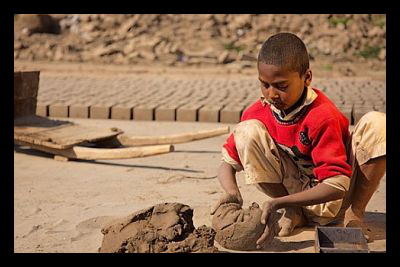 According to the U.N., 21 percent of the population of Pakistan lives below the poverty line and some are left with no choice but to take out loans in exchange for labor. These loans can have very high interest rates, creating a cycle of bonded labor.

Workers labor in the hot sun to pay off their debt and, many times, their family’s debt, which can be passed down through the generations. Although this practice of paying off loans through labor has been outlawed by the Pakistani government since 1992, actual enforcement of the law is not practiced.

Most of the time, work is done for far less than minimum wage since employers regularly do not keep records and authorities have limited resources to oversee the industry. According to Kahlid Mahmoud, the director of the Labour Education Foundation located in Lahore, no more than a dozen kiln factories in Punjab, Pakistan pay the country’s minimum wage of $7.50 per 1000 bricks.

Actual pay can amount to as little as $1.25 cents a day. Workers are not excluded because of age either.

Child labor in Pakistan encompasses over 12 million children according to the International Labour Organization. Two million of these children work up to 14-hour days in the brickmaking industry. According to the Maplecroft risk analysis firm Pakistan places sixth in their list of 10 countries with the worst rankings for child labour. Many times these children work side by side with their parents.

Pakistan has also been ranked by the 2013 Global Slavery index as having “the third highest prevalence of modern-day slavery.” Female kiln workers are among the worst treated. Zakaria Nutkani of Action Aid explains, “Female workers have virtually no rights, as most of them do not even possess a national identity card, which is a basic document to prove a person’s existence in government records.” Nutkani explains further that female workers are often the lowest paid and face never-ending work because of additional responsibilities maintaining their households.

These repercussions can include murder or being sold to human traffickers. The punishments can even extend beyond the individual and to their families. Kiln worker Naser explains to CNN about his work conditions simply stating, “He beats me up if the work doesn’t get done.”

Options of escaping bonded labor are rare or non-existent. Bonded laborer Muhammad Mansha sold his kidney to buy his children out of their family’s debt.

Poverty allows conditions such as these to continue to thrive. It greatly limits the options and opportunities people could otherwise have access to. For these Pakistani kiln workers, this is their reality and they know it all too well.