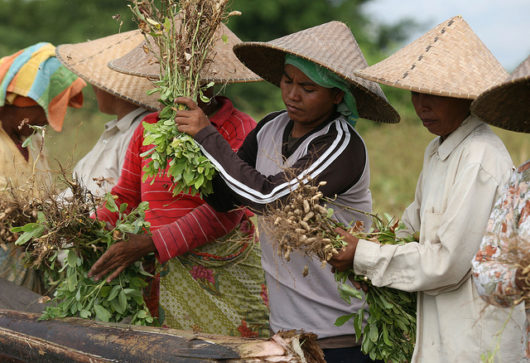 Organic agriculture carries varying degrees of significance for people around the world. Consumers rely upon the health benefits that organic products provide, some producers depend on the higher prices organic products allow them to charge and producers and consumers alike depend upon the environmentally conscientious philosophy that organic lifestyles promote. For these reasons and more, organic farming and poverty reduction are intimately related.

Organic agriculture is a method of production that forgoes the use of pesticides and chemicals in favor of practices that respect the health and purity of the land on which production occurs. Producing without fertilizers and pesticides, however, can be extremely difficult as crop growth is less predictable and plants are much more vulnerable to weather conditions and natural disaster. Thus, when considering the relationship between organic farming and poverty reduction, it is important to remember that organic farming communities do not necessarily always benefit from this form of production. It requires sacrifice and risk.

A major impediment to the ability of farmers to produce and sell organic products on the international market is the extremely high price of organic certification. First, farmers must pay an application fee, then they must pay an annual inspection fee and, finally, an annual certification fee. In Africa, the average cost for organic cocoa certification is $5,500. This is far too much for many small-scale organic farms to pay. They are thus left to sell their products locally.

Still, in countries around the world, people are heavily dependent upon the land for their income and sustenance. This means that any damage to the land severely impedes their ability to sustain an income and to feed themselves. The use of chemicals and pesticides can provide fatal long-term damage to land that could otherwise produce valuable resources. This means that organic farming, despite its difficulties, must be promoted in poverty-stricken areas. Consumers who are able should spend the extra dollar to buy organic products in order to support these farming communities.

How Organic Farming and Poverty Reduction Go Together

There are many important ways that organic farming and poverty reduction go hand in hand. In the long term, organic farmers are likely to earn higher incomes than conventional farmers due to lower costs of crop production and maintenance and the ability to charge higher premiums.

Organic farming also ameliorates food insecurity as organic farmers are able to grow a diversity of crops that help sustain one another. Farmers are able to live off their own production and if one crop fails in a given season, they can still depend on others both to sell and to feed their own families.

Organic farmers also face lower healthcare costs. The use of pesticides and chemicals is often the source of several kinds of medical problems, which can result in expensive medical bills for poor agricultural families. Organic farming is, overall, better for the farmer’s health.

There are parts of the world that recognize the important role of organic farming in poverty reduction. In Asia, it is predicted that organic food sales will rise 20 percent in the following five years. Additionally, organic agriculture around the world increased from $18 billion to $64 billion from 2000 to 2012.

Organic farming can play a crucial role in the reduction of global poverty. Many have already begun to recognize this and are taking action to spread organic practices. Still, it is very difficult for farmers to attain certification impeding the ability for organic farming to stand as a viable option for a great many. If these problems are addressed, the role of organic farming in poverty reduction can only continue to positively grow.