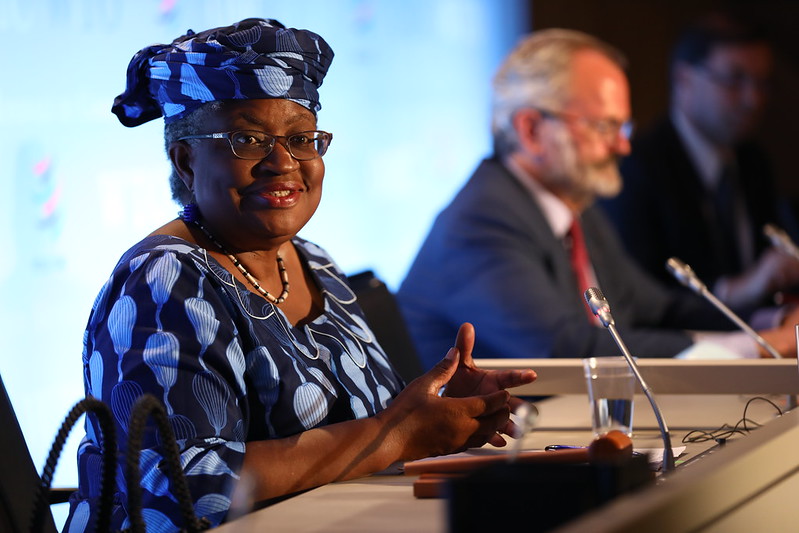 On March 1, 2021, Ngozi Okonjo-Iweala took office as the director-general of the World Trade Organization (WTO). She is the first woman and the first African to hold this office. After experiencing the Nigerian Civil War, she came to the U.S. and studied development economics at Harvard University. She also received her doctorate in regional economics and development from the Massachusetts Institute of Technology. In 2003, she served as Nigeria’s finance minister. After a second appointment ending in 2015, she also served as a foreign minister and worked for the World Bank for 25 years, overseeing an $81 billion portfolio. In her newly appointed role, Okonjo-Iweala promises to influence and implement policy in order to restore the global economy.

What is the World Trade Organization?

The World Trade Organization is an international organization that deals with the “rules of trade between nations.” Member governments negotiate trade agreements that are then ratified in their own parliaments. All major decisions are made by the membership as a whole, either by ministers, their ambassadors or delegates.

The WTO plays an important role in reducing global poverty. Studies show that free trade helps impoverished countries “catch up with” developed nations. More than three-quarters of WTO members are developing countries. Every WTO agreement holds particular provisions for these countries, including longer time spans to carry out agreed-upon policies, “measures to increase their trading opportunities” and assistance to support these countries in building the necessary infrastructure to improve their economies. Least-developed countries are often exempt from many provisions.

The WTO also aims to reduce living costs and improve living standards by mitigating the effect of protectionism on consumer costs. This means that products are more affordable for those with a lower income. In addition, lowering such trade barriers stimulates economic growth and employment, creating opportunities for the impoverished to increase their incomes.

Okonjo-Iweala’s long list of achievements includes many in the realm of poverty reduction. As the minister of finance in Nigeria, she helped Africa’s largest economy “grow an average of 6% a year over three years.” She also helped create “reform programs that improved governmental transparency and stabilizing the economy.”

As the board chair of Gavi, the Vaccine Alliance, she contributed to ensuring vaccine equity. During her 25-year career at the World Bank, she rose to the second-most prominent position of managing director. Okonjo-Iweala ran for the office of director-general of the WTO with the strong belief that trade has the power to lift people out of poverty.

Okonjo-Iweala is also a supporter of COVAX, aiming to resolve vaccine nationalism. During the COVID-19 pandemic, vaccine nationalism is a problem that disproportionately affects impoverished countries. COVAX is a global vaccination effort launched by Gavi and leading partners to ensure vaccine equity.

In a January 2021 article, Okonjo-Iweala writes that “All manufacturers must step up and make their vaccines available and affordable to COVAX,” in order to ensure equitable and timely vaccine distribution to low-income countries. She also warned against repeating history.

In 2009, a small number of high-income countries bought up most of the global supply of the H1N1 flu vaccine, which left the rest of the world lacking. If history were to repeat itself during the COVID-19 pandemic, the impact on impoverished countries, and the world at large, would be devastating.

As director-general of the WTO, Okonjo-Iweala’s immediate plans focus on ending the COVID-19 pandemic with vaccines for all. In a statement outlining her vision for the future of the WTO, she says “the WTO can and must play a more forceful role in exercising its monitoring function and encouraging Members to minimize or remove export restrictions and prohibition that hinder supply chains for medical goods and equipment.”

She also says that member nations of the WTO need to adopt a stronger stance in preventing vaccine nationalism and protectionism. International cooperation, in her opinion, is the only way to come up with the vaccines, therapeutics and diagnostics needed to put an end to the COVID-19 pandemic.

Okonjo-Iweala has promised to face the economic and health challenges presented by the novel coronavirus head-on. Importantly, she notes that “a strong WTO is vital if we are to recover fully and rapidly from the devastation wrought by the COVID-19 pandemic.” Okonjo-Iweala promises to work in a collaborative effort to “shape and implement the policy responses” necessary to restore the global economy.