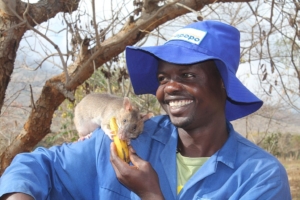 Tanzania is a country located in East Africa that is home to 54 million people. Unfortunately, tuberculosis is a big issue within the country. Tanzania currently ranks within the top 30 countries worldwide that are most affected by tuberculosis. While the national TB budget has consistently stood at around $60 million. However, NGOs like APOPO are also doing their part to fight TB in Tanzania.

Why APOPO is Needed

Historically, Tanzania has struggled to supply clinics with rapid forms of testing. But this is where APOPO helps to bridge the gap. APOPO is an NGO fighting TB in Tanzania by using specially trained rats to detect cases of the disease. Along with the work this group does in Tanzania, it also helps fight against tuberculosis in Mozambique and Ethiopia. Since the program in Tanzania first launched in 2007, the group grew from collaborations with four government clinics to 57 clinics.

Many forms of testing for tuberculosis are quite inaccurate. The better quality methods of testing can be quite expensive and take a longer time to get results. Cheaper forms of testing can often yield false results. Due to cheap testing, people will be given an inaccurate diagnosis. Government clinics in Tanzania mainly use smear microscopy tests due to the test’s affordability.

This method of detection has very low sensitivity rates that range from 20 to 60 percent. To combat the current inadequate forms of testing for tuberculosis, APOPO has implemented a program that uses specially trained rats. These rats can detect cases of tuberculosis at a fast and more accurate rate.

The rats at APOPO’s facilities can test 100 samples in 20 minutes, as opposed to technicians who can only check 25 samples per day. APOPO’s labs can get test results within 24 hours. APOPO’s rats have increased detection rates of tuberculosis by 40 percent.

APOPO is an NGO fighting TB in Tanzania that has seen success in its initiative to incorporate innovative tactics in the fight against tuberculosis. From 2000 to 2018 there have been decreases in total incidents of TB as well as a decrease in new and relapse cases in Tanzania.

Tuberculosis currently ranks within the top 10 causes of death across the world. APOPO already works with 57 clinics in Tanzania. This group’s success through alternative methods of testing can serve as an example of how to fight against the spread of tuberculosis.

Complex Problems with Asylum in the U.S. 3 Sustainable Solutions for Developing Countries
Scroll to top