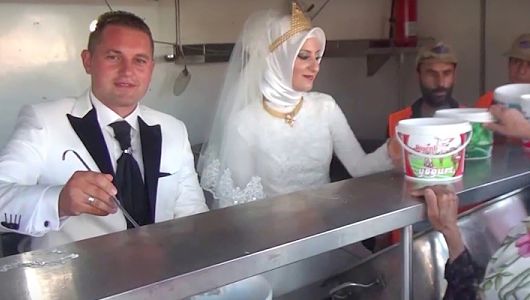 One Turkish couple’s wedding celebration has gone viral on social media — but not for the reasons you might think.

Fethullah Üzümcüoğlu and Esra Polat tied the knot in Turkey’s Kilis province on July 30. While their families had saved money for a traditional post-wedding banquet, the couple decided to spend their wedding day feeding Syrian refugees.

Tens of thousands of war-battered Syrians have taken refuge in Kilis in the wake of Syria’s ongoing civil war. Moved to respond to the crisis, Üzümcüoğlu and Polat spent their reception feeding 4,000 Syrian refugees.

Wedding guests helped the newlyweds distribute dinners from food trucks and even organized a party for the refugees.

According to the International Rescue Committee, Syria’s ongoing civil war has fueled the world’s worst refugee crisis in a quarter-century. More than four million Syrians have fled the fighting, leaving the neighboring countries of Turkey, Jordan, Iraq and Lebanon struggling to support the wave of displaced persons. The UNHCR reports that there are more than 1.7 million Syrian refugees in Turkey alone.

“I thought that sharing a big delicious dinner with our family and friends was unnecessary, knowing that there are so many people in need living next door,” the father explained.

He presented the idea of a charitable celebration to the couple, who accepted.

“I was shocked when Fethullah first told me about the idea,” said bride Esra Polat, “but afterwards I was won over by it. It was such a wonderful experience.”

Photos of the selfless event have spread across social media, with many wishing the newlyweds happiness and blessings in their married life.

Üzümcüoğlu said that sharing their banquet with the refugees was “priceless.”

“We started our journey to happiness with making others happy,” he shared. “That’s a great feeling.”