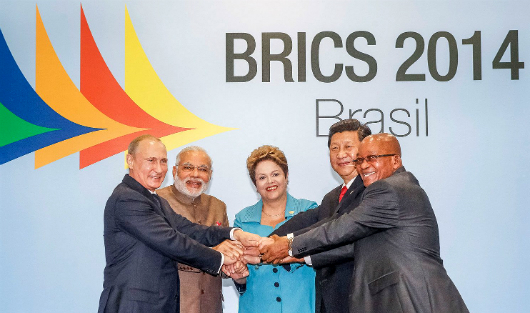 Considered a potential rival to the global influence of U.S.-led institutions like the World Bank and International Monetary Fund (IMF), the Shanghai-based New Development Bank (NDB) is the second multilateral bank poised to begin operations in the near future, along with the Asian Infrastructure Investment Bank (AIIB), which announced its launch earlier this year. Both banks will aim to provide increased funding for large-scale infrastructure development projects in poor and developing regions.

The leadership of the $100 billion NDB will come in the form of a rotating five-year presidency, with the inaugural term going to K.V. Kamath, an Indian banker who had previously worked at multilateral development institutions like the Asian Development Bank.

Experts anticipate that the emergence of the NDB and AIIB will mark a new era of development that will greatly complement Western-led development efforts. An increase in the level and diversity of multilateral investment will help to combat extreme poverty in more effective and creative ways.

“I’m optimistic that we are going to get a very different era when it comes to development cooperation. We’re at the beginning of the end of aid-led, Western-funded, post-colonial development,” said Civicus secretary-general Dhananjayan Sriskandarajah in an interview with Devex. “It’s not just about the rich giving charity to the poor through aid. It is about new forms of cooperation.”

In an open statement to the NDB, 44 civil society groups and social movements declared their hopes that the bank will deliver inclusive and participative development, prioritize poverty-focused goals and emphasize human rights and the environment. The signees claimed that these aims are critical if multilateral development institutions are to realize effective results in the coming years.

“Investment cannot bring development if it does not meet people’s needs. The NDB should support inclusive, accessible, participative development that is driven by communities, addresses poverty and inequality, removes barriers to access and opportunity, and respects human rights,” reads the statement. “If the BRICS can help create an institution that lives up to the above principles, they will have done the cause of international cooperation a great service, true to the name ‘New Development Bank’.”

Development experts note that many of the anti-poverty policies currently touted by leading institutions – austerity, privatization and liberalization, to name a few – have not yielded the results that poor and developing countries have hoped for. The emergence of alternative development institutions like the NDB and AIIB could challenge those long-prescribed economic policies.

According to the chief executive of ActionAid International Adriano Campolina, increased competition among multilateral development institutions will only increase the scale and effectiveness of anti-poverty projects in the regions that desperately need them. However, he noted that these institutions must strive to make poverty-reduction policies a focus on infrastructure development.

“Both industrialized and developing economies have been seeing a rapid increase in inequality,” he wrote in an article for Devex. “Development must also, therefore, prioritize policies like fair and equitable land tenure, creation of decent jobs, strong social protection and free access to quality education that have been proven to reduce inequality.”

Campolina and other experts note that in order for the New Development Bank to successfully differentiate itself from existing institutions, it must prioritize the aims of people in poor and developing countries, not those of itself and of its own donors. If it succeeds, it may well contribute to the absolute elimination of extreme poverty and help to develop the infrastructure required for poor countries hoping to make substantial steps in economic development.