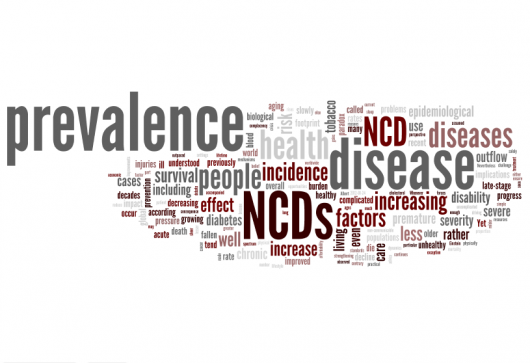 The devastating effects of non-communicable diseases (NCDs) can be seen all around the globe. NCDs are responsible for the majority of deaths in developing countries, and they are not receiving the attention they need in order to be stopped.

NCDs are diseases that cannot be passed from person to person. Also known as chronic diseases, they last a long time and progress slowly. The four main types of NCDs are cardiovascular diseases, cancers, chronic respiratory diseases and diabetes. They can affect anyone of any age, gender, ethnicity, location or income.

However, the distribution of NCDs is not so equally spread. 80 percent of deaths caused by NCDs occur in low and middle-income countries, according to the World Health Organization (WHO).

As well as being concentrated in areas of poverty, NCDs have a large global impact. Sixty-eight percent of global deaths in 2012 were due to NCDs, and 42 percent were premature (before the age of 70) and avoidable, the WHO reports.

The combination of the prevalence of these diseases with the location (countries that are unable to help themselves), means that this problem is quickly growing out of control. Disease-specific solutions are being administered (vaccinations for AIDS, tuberculosis and malaria) in lieu of improving conditions so that NCDs are not even given a chance to affect a population.

Of course, vaccinations for communicable diseases are necessary as well, but they cannot be the sole solution in working toward better health. NCDs are proving to be more of a problem globally than other diseases, and, as such, the health conditions in suffering countries need our attention.

The difference between the U.S. and these affected countries is fewer risk factors. Tobacco use, unhealthy diet and physical inactivity are the top offenders, and lower-income countries lack the capacity to prevent and control these risks.

Although the UN has seen progress with its aid efforts, the focus on NCDs is lost. Goal six of the Millennium Development Goals (MDGs) lays out the initiative to combat HIV/AIDS, malaria and other diseases, but NCDs are not mentioned in the statistics.

For such a globally present cause of death, it would seem natural that NCDs would be a priority for 2015. However, that is simply not the case.

So, where do we go from here?

We know that if the major risk factors for NCDs were eliminated, around three-quarters of heart disease, stroke and type 2 diabetes would be prevented, as well as 40 percent of cancers, according to the WHO.

Health Affairs argues that Universal health coverage provides the opportunity for these diseases to be eradicated long-term. As far as combating NCDs, people in areas of extreme poverty need to be supplied with ways to obtain the necessary medicines without having to pay out-of-pocket.

More attention needs to be given to making accessible health care in developing countries a reality and taking care of those who are losing their lives due to preventable diseases.

In doing so, we must remember: we can conquer NCDs.