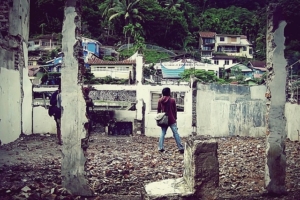 On September 28th, 2018 Indonesia was hit with a 7.4 magnitude earthquake; three days later and as a consequence of the earthquake, a massive tsunami devastated the Central Sulawesi province in Indonesia. Palu and Donggala were amongst the areas worst hit in the province. On October 21st, 2018, the death toll sat at 2,113 people. In fact, the National Disaster Mitigation Agency spokesman, Sutopo Nugroho, stated that 1,300 people were reported missing, 223,751 people were displaced from their homes and communities and 4,612 were reported injured. Relief efforts in in Indonesia began almost immediately and are still underway today.

Fall 2018 wasn’t the first time relief efforts in Indonesia have been needed. Back in 2004, the country faced another devastating tsunami, known famously as the “Boxing Day Tsunami” — the deadliest recorded tsunami in history. Indonesia geographically sits in the “Ring of Fire” — a horseshoe-like basin that sits in the pacific ocean — that is notorious for earthquakes and volcanic activity due to its high tectonic movement. As a result of this proximity, the country faces constant natural threats.

The government of Indonesia has accepted foreign aid in hopes of accelerating recovery and relief efforts. Twenty-six countries have reported to offer help, and different organizations have stepped in as well. Three of which are stated below:

The Australian Council for International Development

The Australian Council for International Development (ACFID) works closely with the Indonesian government and local partners to mobilize search-and-rescue and medical teams, and provide food, shelter and clean water.

ACFID has also made sure to create safe spaces for children — especially those missing parents and guardians. Keeping in mind the psychological effects of this disaster, the organization has offered psychosocial support to affected inhabitants.

Malteser International is dedicated to making sure that the affected have access to clean water in order to avoid the spread of disease. Unfortunately, the group finds it challenging to transport clean water to remote areas due to the destruction of roads and infrastructure.

The World Bank — perhaps offering the largest aid — has declared a $1 billion relief fund available to the Indonesian government. Based on scientific, economic and engineering analyses, the World Bank has estimated the physical loss in Sulawesi at $531 million with $181 million of that for residential housing, $185 million for nonresidential and $165 million for infrastructure.

The fund is piloted by a $5 million grant for technical assistance to ensure that the reconstruction is planned out and executed with efficiency and accuracy. It could offer cash transfers to 150,000 of the poorest families affected, which will support the local economy and employment levels during the recovery process.

The relief efforts in Indonesia are extensive, but the donations from these three organizations will go far in helping Indonesia get back on its feet and ensure that the inhabitants impacted by this natural disaster are taken care of safely and effectively.