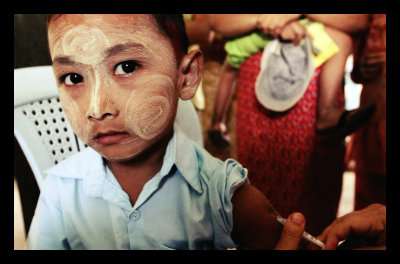 In January 2015, the Myanmar government launched the first stage of the largest national campaign to eradicate and control Measles and Rubella by the year 2020.

The second stage took place in February 2015. Initially, these beginning stages were concentrated on Measles, but from May 2015 onward, the national campaign will offer the Measles and Rubella vaccine jointly.

The campaign is supported by the WHO, GAVI, American Red Cross, the U.N. Foundation, the U.S. Centers for Disease Control and Prevention and UNICEF. The goal is to reach 94 percent of the population through vaccination teams of 12,000 health care professionals. The aim is to reach 17 million children between nine months and 15 years in 65,000 villages and 45,000 schools.

Myanmar has remained committed to vaccinating its population against fatal and debilitating diseases. In 2013, a polio immunization campaign was launched and 370,00 children under five years were vaccinated using the oral drops method. In early 2014, Myanmar, along with many other states in Southeast Asia, was declared polio-free.

Health care is reported to be expensive, of a poor quality and has difficulty in providing attentive care toward patients in Myanmar.

This vaccination campaign is also incredibly important because the population has been neglected in terms of health care due to the ongoing conflict and political issues. There are 587,000 internally displaced persons. There are 800,000 living in the western state, Rakhine state, who are stateless and 140,000 who have fled from their homes. Nevertheless, this campaign is attempting to reach those living in Rakhine state, which has been in an increasingly violent conflict-ridden state since 2012 as there are numerous clashes between Muslims and Buddhists. The vaccination campaign aims to reach populations in this region at a higher rate to match the national level.

While there are political hurdles to achieving an overall better health care system, the coordination of efforts between the state, local and international bodies in regard to vaccination is successful. This vaccination campaign is a major stride for Myanmar investing in the betterment of its people.