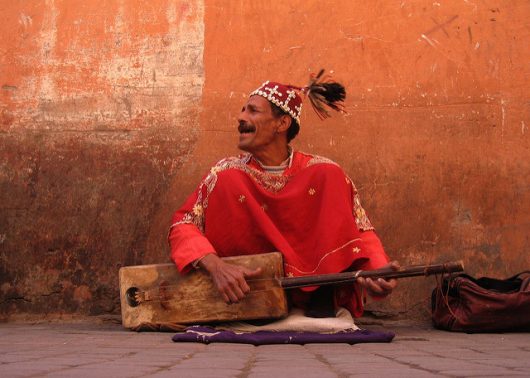 Robert Browning once said, “Who hears music, feels his solitude peopled at once.” For those living in poverty around the world, being surrounded by others in the same predicament often manifests in a collective loneliness. While the cadence of the day-to-day drones on, music’s tempo sets the pulse of nations. Music and poverty may dance in the shadows at times, but their connection lives beyond subtleties — it is a real and often necessary connection.

Medicine for the Soul

Just how powerful is music? According to eMedExpert, an online informational Web site dedicated to health and medicine, music can:

The Fajara Cancer Centre in Nairobi, Kenya bears witness to the healing power of music. When Berklee College of Music graduate Cara Smith did research in East Africa for her degree in music therapy, cancer patient Aisha hadn’t spoken all week while undergoing treatments. The two sat down together and wrote a song, creating an avenue for Aisha to express herself despite the verbal challenges from personal trauma.

Inspired, Smith went on to create Umoja Community Music Therapy which now operates in more than 50 schools, hospitals and community centers in Uganda and Kenya.

Smith, along with fellow graduates Brooke Hatfield and Kristina Casale, have also seen former child soldiers climb out of depression and trauma to find joy, and young women become empowered through music. Smith points out the connection of music to East African culture and sees it as an open door ready to be pushed.

Passing away earlier this year, Jose Antonio Abreu left a legacy of the profound impact of music. As founder of a music program for Venezuelan children, Abreu understood the relationship between music and poverty. His program, known widely as “El Sistema” (the system), trained musicians across all social classes.

According to Abreu, the system fought poverty at its roots. He explained to 60 Minutes’ Bob Simon, “A child’s physical poverty is overcome by the spiritual richness that comes from music.”

El Sistema helped to create other musical movements in developing countries, such as those implemented by Children International (CI), an organization devoted to breaking the cycle of poverty on the world stage. With programs in the Dominican Republic since 2014 and Columbia since 2015, CI sees first-hand how the method puts an emphasis on peer-to-peer instruction, cultivating leadership and selflessness, and  keeps youth away from gangs and other destructive environments at the same time.

Then, there are the nonquantifiable effects of music. Juan David, a participant in the Columbian program, says “when I’m playing, I feel very peaceful and calm, because I leave my world behind.”

While a temporary escape from reality might be welcome, song may wield the power to affect real change in health and development outcomes through their musical passions. Case studies in Africa have shown the utility of songs in networking, fundraising and advocacy.

In 2008, U2’s lead singer and humanitarian, Bono, led his One Campaign, which united over 100 international artists, and put major pressure on G8 summit leaders to create change. More recently, in 2014, One’s Do Agric Campaign sent a message to African leaders to invest in agriculture.

The cornerstone song for that campaign, Cocoa na Chocolate, plainly stated: “like the seeds of light forever, let the Earth provide for her children.” The track, one of the biggest collaborations in Africa’s history, inspired a nation to take initiative and provide for itself.

In Africa, songs have been written for political mobilization, as a tool for therapy, as a cry against social injustices and as a show of cultural solidarity.

Music and poverty seem to provide limited evidence of a direct cause/effect correlation (i.e., music decreasing levels of poverty), but music’s inherent emotional value strikes a subliminal chord almost universally. With iconic international musicians like U2 writing charity songs that encourage action, music disseminates information and raises awareness, while encouraging those in poverty that they are not alone.