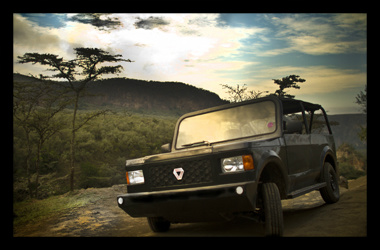 The shortest distance between two points of interest is a straight line. But not in Africa. With 80% of the population living in rural areas, commuting from town to town can get a bit tricky with potholes, dirt roads, or sometimes no roads at all. When Joel Jackson moved to Africa from England in 2009, he never pictured himself running an automotive company a couple of years later, especially one out of Nairobi.

The horrid conditions of Kenya’s roads made Jackson realize how important improving their modes of transportation were to the country’s economy. “Transportation is as fundamental to developing countries as healthcare, education, markets and all the other things that drive prosperity,” he commented. While paved roads are slowly appearing around the continent, Jackson sees Mobius Motors, his company that builds “African cars for African roads,” as having the potential to change the way African businesses and trade functions.

Every aspect of the Mobius Two, the company’s prototype, was created with the average African entrepreneur in mind. With a steel frame, the car has no windows, eliminating the need for air conditioning. All parts of the car have been made in a fashion familiar to local mechanics so that repairs and parts are cheap and easy to come by. Due to its light frame and .4 gallon gas engine, the all-terrain vehicle can securely carry up to 8 passengers or 1,500 pounds. This makes it perfect for the transport of goods across long, rugged distances.

One thing Jackson makes sure people keep in mind about Mobius is that it is not a charity. He plans on making a profit once production begins, with an average price tag of about $6,000 per vehicle. However, the goal of his company is not to focus just on monetary value but to team up with innovators from around the world to recognize the change these vehicles can bring to the global market and change the way Africa moves.

It is obvious that Mobius’ clients will not be the average African villager. For those entrepreneurs looking to expand the reach of their businesses, the Mobius Two holds the key. While they may be the ones fronting the cost of the vehicle, the entire process will most definitely include and improve the lives of thousands across Kenya, and hopefully the rest of Africa, in the foreseeable future.

The Wheelchair FoundationParis Declaration on Aid Effectiveness
Scroll to top