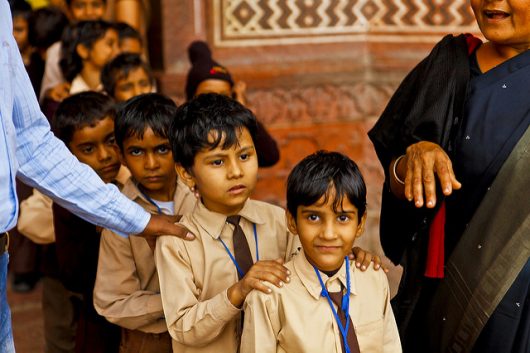 In recent years, India has improved its education system greatly. An increasing number of children have access to education and enrollment rates in primary school are on the rise. Over 98 percent of Indians have access to a primary school within one kilometer of their home. Yet, the nation still faces challenges with poor education and high dropout rates. In an effort to combat these challenges, India has introduced mindfulness in education systems across the country.

India is among the top five countries for children not attending primary school. There are over 1.4 million students between the ages of 6 and 11 not enrolled. Approximately 29 percent of children drop out of school before finishing the five years of primary school, and only 42 percent of students complete high school.

Many schools are not able to handle the needs of all the students. Only 74 percent of schools have drinking water and over 50 percent of schools have working restrooms for girls. Recent reports show that learning levels are not being reached, and standardized tests show that countless children will not progress in the school system. This highlights the need to improve the quality of education in India.

The Lasting Ramifications of Stress

Many students face external problems, such as poverty, that can seriously hinder their education. New Delhi slums have astounding illiteracy rates of 70 percent; however, the entirety of New Delhi has an impressive literacy rate of 86 percent. In the 2011 census, it was reported that 3.9 million residents of New Delhi live in slums. Non-government reports have estimated that the number of impoverished people living in the slums is much higher, sitting around 8 million. Residents of the slums lack access to adequate plumbing, drinkable water and transportation.

Children who are constantly exposed to poverty-related stress can have serious health consequences later in life. Physical reactions from stress, such as increased heart rates, stress hormones and adrenaline take a serious toll on a child’s health. Eventually, these children are at a higher risk of developing diabetes and other life-altering illnesses.

Over time, the structure of a child’s brain is forever altered. Cognitive functions are impaired, which can have disastrous consequences on a child’s emotional responses and attention span. Impoverished children are also at a higher risk of suffering from depression. In fact, one out of four children surveyed between the ages of 13 and 15 face the challenges of depression in India. In contrast, children who do not experience stress or depression experience healthier sleeping habits and are able to easily fight off illnesses due to having stronger immune systems.

India is combating stress-related illnesses and the inability to focus in class among children with an additional course in “Happiness.” The course objective is to improve the students’ emotional well-being through meditation, story-telling and other activities that focus on mental health. The students will learn mindfulness, empowering them to be less distracted and to improve their ability to focus. Apra, a primary school teacher, believes that mindfulness in education will help many students in Delhi. She adds that the course will specifically benefit children from poorer families as they will have “time to be happy.”

Mindfulness in education has shown encouraging results in urban schools. Created as an alternative to detention, Robert W. Coleman Elementary School in Baltimore has implemented an afterschool program dedicated to meditation and mindfulness. Success can be noted by the drop in suspensions at school. During the 2012-2013 school-year, 4 students were suspended. However, the following year there were no suspensions, something the school attributes to this program. Moreover, a study by Stanford University found that mindfulness in education has also helped lessen symptoms of PTSD.

Mindfulness in education is not the solution to end poverty, but it is a method that can be used to lessen the disastrous effects on impoverished children. Studies on mindfulness in education are still very new, but studies point in the direction that mindful practices will have tremendous results for students. Furthermore, the evidence shows that disadvantaged children will greatly benefit from this practice. For India, this could mean that retention rates in school will rise, and more children will be able to receive a quality education.