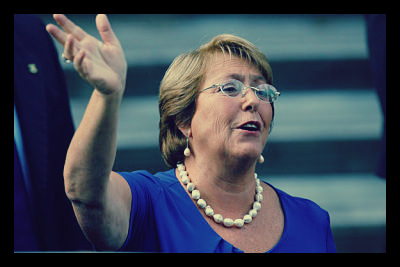 Chilean President-elect Michelle Bachelet was inaugurated on March 11 at the presidential palace in Santiago, Chile. This will be the second time Bachelet is sworn in as president after holding the office from 2006 to 2010. Bachelet, a moderate socialist, will be taking the reins from the current president, billionaire businessman Sebastian Piñera.

In a very symbolic ceremony, the head of the Chilean Senate, Isabel Allende, swore in Bachelet. The two female politicians share a past linked to the 1973 coup of the democratically elected Salvador Allende that carried dictator Augusto Pinochet to power. Bachelet is the daughter of an air force officer who was tortured by the Pinochet regime before dying in custody while Allende is the daughter of former Chilean President Salvador Allende, who committed suicide on the day of the coup.

During her inaugural address, Bachelet made inequality the focus of her speech. She said that although the policies of the Piñera administration had generated economic growth and jobs, Chile could and should be a fairer society.

Other solutions to fight inequality include changing the country’s education system by making it entirely state-funded within the next six years, a response to the student protests of 2011 to 2013 that occurred throughout Chile. Currently, the state funds a paltry percentage, leaving poor households to attend underfunded state universities. Bachelet plans to provide full state funding by increasing the corporate tax rate.

Despite promises to reduce inequality, Bachelet will face difficulty in implementing these proposals. Chile’s economy is slowing down from 5.6 percent growth per year in 2012 to just over 4 percent this past year. Moreover, prices of Chile’s primary product, copper, have fallen, which would dip the country’s economic growth even further.

Bachelet will not have any issue pushing her policies through the chambers of Congress, as her New Majority coalition enjoys a healthy majority in both the Senate and Chamber of Deputies. Chileans will also be able to monitor her promises closely since the publishing of a list of 50 proposals she intends to complete within her first 100 days in office spread out across 14 different policy areas.

The widely popular Bachelet has promised to create a more egalitarian society through the promise of free education. Though she has come under fire from critics who say the Chilean economy is losing steam, she remains hopeful that her country can construct a more inclusive environment for its people.