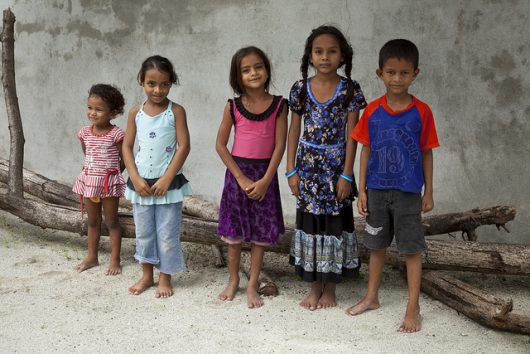 Poverty in the Maldives is improving. The country has grown into a middle-income country over the past 40 years. Its population has steadily increased, sitting now at nearly 410,000 people. Life expectancy at birth has also increased steadily and consistently in the Southern-Asian group of islands in the Indian Ocean over the past five decades. The Maldives life expectancy at birth was just 37 in 1960. It currently stands at more than 76 years of age.

Economically, the former British Protectorate and current climate change champion has bettered itself largely in the past decade. The country’s Gross National Income (GNI), or the sum of the value added by all resident producers, was less than $3,500 per capita in 2003. That number climbed gradually, topping out at $4,000 in 2007.

In reference to a more widely understood, accepted and analyzed statistic, Gross Domestic Product (GDP), poverty in the Maldives has rebounded since the turn of the century.

Annual GDP growth percentage figures fell off the cliff from 2004 to 2005, dropping more than 21 percentage points, from 12.5 percent growth to shrinking by 8.7 percent.

However, GPD growth was up 28.3 percent the following year, to 19.6 percent annual GDP growth in 2006. Since that time, growth in GDP has leveled out and remained consistent, around 3.5 percent today.

In 2009, it was estimated by the World Bank that 15.7 percent of the population lived in poverty in the Maldives. Severe poverty was 7.3 percent, measured as the proportion of those living on less than $1.90 a day.

Today more than 98 percent drink clean water, and 97.9 percent have access to improved sanitation facilities. Poverty in the Maldives is not entirely reflected in its GDP either as it currently sits at $3.4 billion and growing.

According to the CIA’s World Fact Book, poverty in the Maldives may not be improving, as the collection of Southern-Asian islands in the Indian Ocean continues to spend, dropping its gross national savings eight percent in two years (2014-2016).

Poverty in Maldives — if measured by unemployment numbers — presents a problem in that more than 11.5 percent of its 392,960 people are without work.

While some facts and figures project an improving economy, poverty in the Maldives remains an issue as the country spends more than its revenue and works to combat climate change. The region has witnessed fiscal expansion and domestic growth, yet may feel after effects of an unbalanced trade ratio in coming years.