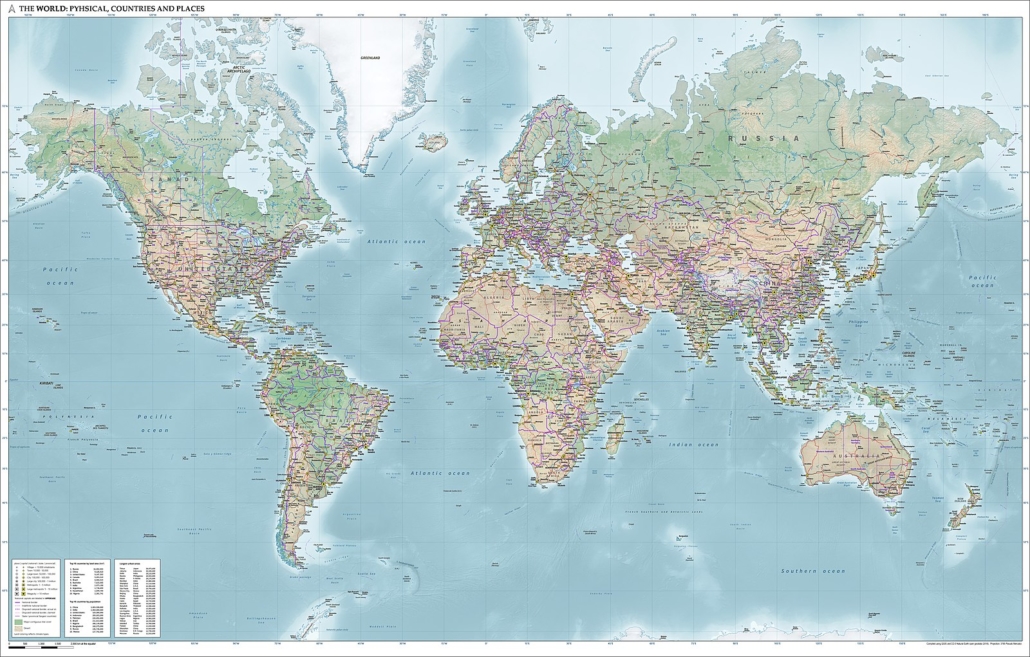 The map most people are familiar with looks something like the image above, having learned about it in school. But what if they learned that this map is wrong and that there is such a thing as map bias?

The Map Everyone Knows

The most common maps that people are familiar with are versions of the Mercator Projection Map. Flemish cartographer Gerardus Mercator created this map in 1569. Originally intended solely for ocean navigation, the map has found its way into the classrooms of many western schools including those in the United States. The Mercator Projection has many flaws and it is a prime example of how map bias can shape one’s world view.

As Gauss’ Theorem Egregium proved, it is mathematically impossible to translate a sphere onto a 2D plane without creating distortions in either the shape, size, distance or direction of points on that sphere. That is why creating maps of the world is so tricky. However, Mercator’s map is particularly flawed, and it is especially problematic when teaching young children basic geography.

The map compromises accurate landmass size in favor of accurate direction, in the hopes of being a better tool for navigation. By the north and south poles, landmasses are stretch beyond proportion while at the equator, countries shrink.

For example, the map shows Greenland as roughly the same size as the entire continent of Africa. However, in actuality, Africa is 14 times larger than Greenland. The European continent seems to be as large as South America when South America should really be twice its size. According to the Mercator map, the equator should run through Florida, not Indonesia, Brazil and the Congo. Additionally, the state of Alaska appears massive on the Mercator Projection, seemingly the size of half of the contiguous United States. However, its landmass is actually smaller than that of Mexico.

Map Bias and its Effects on our World View

With all these seemingly obvious flaws in the Mercator Map, it is difficult to understand its continued use in classrooms. However, when you analyze the Eurocentric bias in much of western education, the purpose of such a flawed map becomes clearer.

The Mercator Projection puts emphasis on Europe and North America. It both places them at the top, and enlarges them and shifts them downward to appear more central on the plane. Meanwhile, developing countries in Southeast Asia, South America and Africa appear minuscule in comparison, literally below the industrialized western nations.

This teaching of the Mercator Map is a prime example of what many know as map bias. Map bias can deeply affect the way people view the world and their inner sense of “importance.” When one sees their own country as larger, it may warp their views of the significance of other countries.

In a 2002 study that the Journal of Behavioral Decision Making published, an evaluation of 3-year-olds and adults showed that humans favor larger stimuli. Humans naturally gravitate to things that are larger and more centered. Another study from Kai Krause, a professor from the University of California Santa Barbara, showed that a majority of school children believe that the United States is the “largest country in the world.”

Therefore, people may unconsciously place the shrunken developing countries out of geographical importance, possibly affecting how much they see these countries as being “worthy” of support. The Mercator Map projects the message of colonialist superiority and reinforces the perceived inferiority of developing nations.

How to Change Map Bias

There has been much debate in recent years as to how to address issues of map bias. It is becoming increasingly clear that the education systems in place in western nations should stray away from imperialistically revisioned history including the way they teach geography.

The simplest solution is to start the widespread use of maps that do not discount developing countries. One example of this push came from the Boston Public Schools Board of Education in 2017. The school board voted in favor of adopting the Gail-Peters Projection to replace the Mercator Projection. It hopes to combat the diminished significance of southern-hemisphere continents on the latter map due to 86% of its students being students of color.

American schools should adopt maps that more accurately represent the planet. The Mercator Map is a colonial relic and schools should no longer use it to teach what the world looks like.