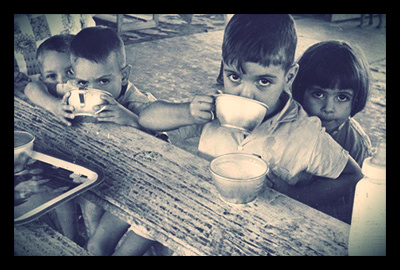 Hunger and malnutrition plague millions of people globally, but just how many people go hungry?

Statistics show that 842 million people in the world do not have enough to eat. The vast majority of these hungry people, about 827 million, live in developing countries, where 14 percent of the population is undernourished. Asia currently has the largest number of hungry people, over 500 million, but it is Sub-Saharan Africa that has the highest prevalence of hunger and malnutrition. One out of six children, 100 million children in developing countries, is underweight. Throughout the world, one in four children’s growth is stunted from malnutrition, particularly in these developing countries. Poor nutrition causes nearly half of deaths under the age of five, totaling 3.1 million children a year.

Since 1990, global hunger has been reduced by more than 34 percent, but roughly one billion men, women, and children are still food-insecure. Since the federal government began Food for Peace in 1954, more than three billion people in over 150 countries have benefited directly from U.S. food aid. An increase in this assistance would make substantial changes throughout the world. WFP calculates that $3.2 billion is needed per year to reach all 66 million hungry school-age children.

The world produces enough calories for every person on earth to eat around 2700 per day for each human. Millions of people go hungry not because food is lacking. Rather, many of these calories are not used to feed humans. One-third is used to feed animals, 5 percent is used in the production of biofuels, and up to a third is simply wasted. The current system in place allows the wealthy half of the planet to eat well while the rest of the world struggles to eat at all.

Many organizations and programs aim to reduce global hunger. Supporting peasant farming is one key factor in this goal, but it is equally important to rein in Western-style culture and the standard the American diet creates.