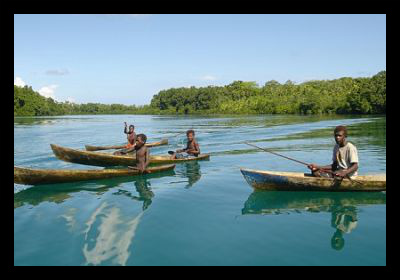 The Solomon Islands consists of a scattered archipelago located in Oceania, just east of Papua New Guinea and northeast of Australia. Based on the Human Development Index, the country ranks 143 out of 187, meaning that the standard of living is extremely low in the country.

A majority of the population lives in rural areas and relies heavily on subsistence gardens and the sea to supply food. Recently, there has been increased access to imported foods high in carbohydrates and fat, consequently making the islanders’ diet less nutritious. Additionally, due to an increase in global food prices, preferred items such as canned tuna and fresh marine fish are becoming harder to come by.

The global financial crisis beginning in 2007 created a heavy burden for Solomon islanders. Food prices increased by 53 percentage points.  Staple foods such as rice, noodles and flour were affected the most by the increases. Islanders living in urban areas have been worse off than their rural counterparts since they do not have the land to grow their own crops.

Children under the age of five are greatly affected by malnutrition in the Solomon Islands. About one-third of kids are stunted and roughly five percent are emaciated.

Since more children are lower in height for their age group compared to lower in weight for their height group, it is evident that this young population attains their daily energy requirements, but that the foods consumed are lacking in nutritional value. Stunting is a result of chronic malnutrition and inadequate food intake. There is a clear deficiency in essential nutrients and vitamins that leads to slower development and reduced growth.

Malnutrition in the Solomon Islands also precipitates many infectious diseases in the young population. In a Demographic and Health Survey, it was found that 21 percent of diarrheal episodes were among children ranging from 12 months to 23 months of age. There is also a problem of tuberculosis and malaria among children, although the numbers have been decreasing over the years.

Malnutrition is persistent, slow acting and leads to harm and death for children on a large scale. It has serious implications on a child’s mental and physical development.

Local government officials need to promote behavioral changes and empower caregivers to take responsibility for the nutritional rehabilitation of children. By maintaining the quality and quantity of foods a person eats and ensuring adequate healthcare, the threat of malnutrition can be reduced and eventually eliminated.

Why Are Chadian Women Dying? Ending Global Poverty By 2030
Scroll to top