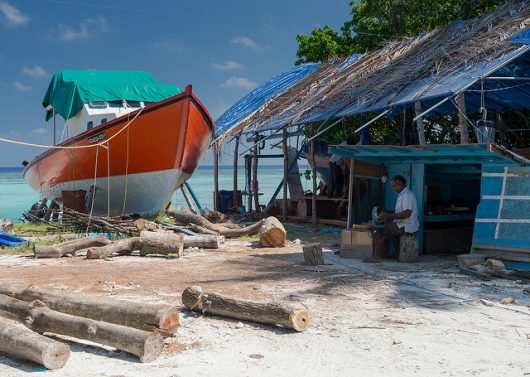 Maldives is a group of islands in the Indian Ocean. While the country was a life expectancy of 77 years and a literacy rate of 98.4 percent, the Maldives poverty rate still allows room for growth.

Though this seems a bit higher, other South Asian countries show even greater numbers for the same statistic. For example, India’s is almost 22 percent, Nepal’s is over 25 percent. Bangladesh ranks higher than all of them, coming up at over 31 percent.Bhutan and Sri Lanka fall below Maldives—at 12 and 6.7 percent, respectively.

When looking at 2012 data on the percentage of “employed population below $1.90 purchasing power parity a day,” Maldives settles in at 6.6 percent. This means that it still ranks below Bangladesh (over 73 percent), India (almost 18 percent) and Nepal (over 12 percent).

Similar to the statistic regarding the national poverty line, only Bhutan and Sri Lanka fall below Maldives in the list of six nations—both resting at slightly over four percent.

The Maldives tout an unemployment rate slightly below 12 percent, a GDP per capita at about $11,282 and tourist activities accounting for a quarter of its GDP.

However, it is important to note that a variety of issues still impact the nation.

The UNDP points out a lack of opportunities for female autonomy, a need for greater answerability within governing bodies and the dangers of environmental degradation.

Rural Poverty Portal also touches on problems the nation struggles with. It indicates that much of the country’s poverty exists on islands where fishing and farming predominate. Focusing on the less urbanized areas, it highlights that insufficient supply of natural resources, low credit and poor farming techniques all contribute.

Still, in relation to many of its counterparts, the Maldives poverty rate suggests much promise for the South Asian country. Although the nation must make improvements in a variety of aspects beyond those listed, its current status reflects its well-being.