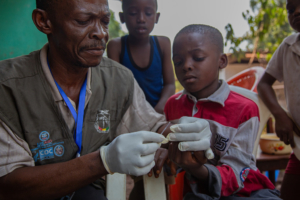 At the young age of six years old, YouTube and comedy star Kacaman (aka Darcy Irakoze) just became the latest victim of malaria in Burundi. He was one of the biggest names in Burundi’s comedy scene and had thousands of views on YouTube. His videos, featuring the rural dirt floors and rusty villages of Burundi, were lighthearted and melodramatic skits starring himself and other comedians/actors. Darcy Irakoze is just one example of the need to improve malaria treatment in Burundi.

Kacaman’s death brings to light an often-unspoken crisis: Burundi’s malaria epidemic. Nearly half of the country’s population has been affected by malaria this year. Of that number, 1800 have died from the disease. This staggering amount actually rivals the number of deaths from Ebola in the neighboring Democratic Republic of the Congo.

Poor preventative measures have been the driving factors behind the epidemic. These include a lack of mosquito nets, the movement of the population with low immunity to malaria from mountain areas to city areas and various changes in climate. The crisis has received some attention from the World Health Organization and the United Nations, but it remains remarkably untouched as a result of the current leadership. Afraid of admitting weakness in health policies, President Nkurunziza is hesitant to admit he needs help increasing malaria treatment.

An Epidemic of the Poor

The brutal reality that a six-year-old boy in Burundi can access the internet and YouTube but not malaria treatment presents a serious call for action. Often referred to as the “epidemic of the poor,” malaria disproportionately affects poverty-stricken areas like Burundi because of the expense required to purchase preventative measures and medical treatment.

The disease presents many ramifications for family members of the sick. They deal with psychological pain, the strain on already tight budgets and job loss. Additionally, malaria damages the economic wellbeing of countries as it decreases the chances of tourism and foreign investment. This keeps poor countries in a vicious cycle because they are unable to provide enough funds for malaria treatments or to improve other aspects of their country.

Innovations like the Kite patch offer promising improvement for malaria prevention. The patch works by making humans virtually invisible to mosquitoes for up to 6 hours, stopping any bites. The company is working to distribute the patch around the world through the Kite-Malaria-Free Campaign, but it still needs more funding. The World Health Organization has launched the “high burden high impact” campaign as a response to countries facing extremely large epidemics. This entails a more aggressive approach to preventing and treating malaria by working with national governments in each of the countries to create an organized and strategic approach.

Increasing prevention is still vital in the fight against malaria. Widespread distribution of mosquito nets and insecticide in areas where these items are inaccessible or too expensive could yield massive results. More effective antimalarial treatments are also needed to fight malaria. The problem of the developing resistance to antimalarials in certain populations needs to be addressed to increase the efficacy of the drugs. Finally, a successful malaria vaccination needs to be more accessible. A semi-effective vaccine has been developed, but the technology still requires some fine-tuning.

It is likely at least one child will have died from malaria in the last minute. Kacaman was one of those children. His death should inspire a revitalized passion and determination to conquer malaria. While some incredible advances have been made, more is needed. Hopefully, these efforts can make this world one where malaria treatment and prevention is just as viral as YouTube.

Where is the Northern Triangle?Improving Ghana’s Local Health Using Drones
Scroll to top