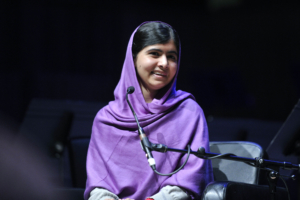 Fighting for one’s own education in this world is an honorable feat that many aspire for but sadly do not accomplish. At the age of seventeen Malala Yousafzai did just that. She is known for being the youngest person to receive a Nobel Peace Prize for her activism for right for women to have access to education.

Malala was born in 1997 in Mingora, Pakistan, where she was not banned from the opportunity to have an education. Yousafzai attended a school that her father founded. Once the Taliban began attacking their rights to education, she knew she had to say something about it. She gave a speech in 2008 entitled “How dare the Taliban take away my right to basic education?” This was just the start of her growing platform of writing and speeches in activism towards girl’s education.

In 2009, Yousafzai made her first BBC blog post that exposed the daily hardships that girls faced daily in the Swat Valley of Pakistan. Her posts were under a pseudonym that eventually was discovered. At the time the Taliban in the area was banning all girls from attending school, this did not stop Yousafzai from her protests. Even after her name was discovered, Yousafzai continued to post blogs about the daily violence, intimidation, ridicule and suffering that the girls faced.

As her popularity grew, the Taliban began to view Yousafzai as a threat. The uprisings built up and on October 2012, as Yousafzai was boarding her school bus, she was shot three times. The injury was so serious she was sent to Birmingham, England for further care. Even after the attempted assassination, Yousafzai continued to be an activist for women’s rights, especially education.

The United Nations petition for all children to have access to education by 2015, was inspired by Yousafzai. She has been honored with countless awards, including the 2014 Nobel Peace Prize along with Kailash Satyarthi of India, who is fighting against child slavery around the world. Both individuals were awarded because of their efforts towards “their struggle against the suppression of children and young people and for the right of all children to education.”

Malala Yousafzai is a perfect example that if you have a strong enough belief in something, you do have the power to enact change. She stood up for not only herself, but girls all across the world who were told that they would not be given an education.

The power of one voice is truly strong enough to rattle the world.