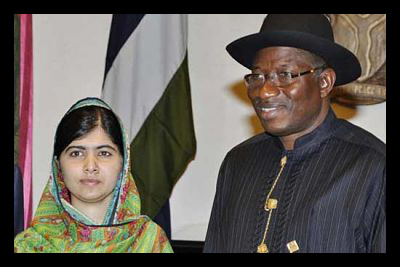 Malala Yousafzai, the Pakistani activist who in 2012 survived gunshots during a Taliban assassination attempt, met with Nigerian President Goodluck Jonathan to urge him to meet with the parents of recently kidnapped schoolgirls.

Since the age of 11, Malala has advocated for girls’ education, which led to the Taliban issuing a death threat against her. When they tried to assassinate her in 2012 — when she was just 15 years old — they failed.

As a result, Malala dedicated her life to activism, spreading a message on the importance of education and urging political leaders to help young women in need.

Malala therefore felt deeply concerned about the 276 girls abducted from a secondary school by Boko Haram in Chibok, a region of northeast Nigeria. The girls were abducted on April 14, and 219 of them are still missing.

In a recent video, Boko Haram leader, Abubakar Shekau, announced that he would only release the girls if the Nigerian government released imprisoned Boko Haram fighters. In the video, Shekau also greeted Al Qaeda and other prominent terrorist leaders across the Middle East, and denounced democracy and all forms of Western education.

He ended the video by firing an AK-47 rifle into the air in a show of violence.

“Nigerians are saying ‘bring back our girls’ and we are telling [President Jonathan] to bring back our arrested warriors, our army,” Shekau said.

Malala spent July 14, a date designated international “Malala Day” by the United Nations, visiting with the Nigerian President, urging him to do everything in his power to free the girls captured by the Boko Haram militant group.

“As we celebrate Malala Day on July 14, I have both hope and heartbreak,” Malala said. “I did not think that, just one year after my U.N. speech, more than 200 girls would be kidnapped in Nigeria by Boko Haram simply for wanting to go to school. These girls are my sisters.”

During Malala’s meeting, President Jonathan agreed to meet with the parents of the abducted schoolgirls. He also promised scholarships to all of them once they were released.

“The president has expressed his solidarity with those girls and his sadness,” Malala said. “He has assured that these girls will come back home safely.”

She went on to say that the president is currently considering the safest option to bring them home.

Malala cited over 66 million girls lacking access to education worldwide. She blames the lack of education on the large numbers of child brides in her home country of Pakistan. She feels that if young women are allowed to go to school and given more opportunities, they will not so readily relinquish their youth and freedom.

“I know education is what separates a girl who is trapped in a cycle of poverty, fear, and violence from one with a chance at a better future,” Malala said.

In recent weeks, Nigerian officials have hinted at progress in planning a rescue mission for the captured girls. But, according to a recent statement released by President Jonathan, the Nigerian government refuses to make any negotiations with Boko Haram.

Some feel this may be a dangerous tactic, since Shekau has openly taken credit for at least two recent bombings of Nigerian cities.

No matter what the Nigerian government plans to do, Malala has hope that everything will work out for the captive girls.

“We raise our voices so that those without a voice can be heard. We pledge not to forget the voiceless. Not to get tired of calling for the creation of a world that we want to live in,” Malala wrote. “Not to lose hope, and not to stop caring.”