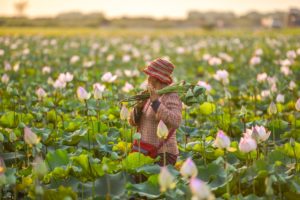 Several activists and actors have raised alarm over the potentially devastating effects that personal protective equipment (PPE) can have in terms of increasing pollution around the world. There have been reports of PPE waste collecting on coasts around the world. Plastic pollution negatively impacts ocean health and, for maritime nations, this could translate to economic losses and the loss of livelihoods for those working within the ocean economy. One study by Plastics Hub found that if every person living in the UK utilized a single-use face mask for every day of 2020, it would contribute an additional 66,000 tons of plastic waste. It is unclear how much of this waste could end up in marine environments, but with 150 million tonnes already circulating the earth’s water, there is a pressing urgency to address the unsustainability of single-use face masks to fight the spread of COVID-19. As a result, an eco-friendly designer in Cambodia created lotus face masks to address this PPE waste.

Is There a Way to Combat PPE Pollution?

Cambodia is not exempt from the negative impacts that pollution can have on marine environments. The Food and Agriculture Organization of the United Nations (FAO) identifies Cambodia as being highly dependent on its aquatic resources for both food security and the livelihoods of the Cambodian people.  In 2013, Cambodia averaged 700,000 tons of fishing and aquaculture production.  At a conference on maritime issues in Cambodia in 2015, hosted by the National University of Management in Phnom Penh, speakers highlighted the risk pollution poses to the economic livelihoods of those who depend on the marine economy.  The FAO has also spoken about the degradation of the marine habitat in the country due to pollution. Photographer Niamh Peren described one scene of coastal pollution in Sihanouk, Cambodia as “mountains and mountains of plastic.” Pollution in the marine environment is a global problem. Due to the nature of the ocean’s currents, marine plastic pollution does not respect national boundaries and one country’s actions will not be enough to address the problem alone. However, Awen Delaval, an eco-friendly fashion designer, is implementing an innovative solution to tackling plastic pollution, while simultaneously diversifying the economy in Cambodia and alleviating poverty rates in the country.

Delaval’s lotus face masks are made utilizing ancestral techniques of producing lotus fiber from lotus stems, which are commonly regarded as waste within the country. The entire process of creating sustainable lotus face masks is entirely eco-friendly, as well as biodegradable.  The fabric produced using lotus fibers is remarkably efficient at filtration and, according to Delaval, is a superior fabric due to its light texture and breathability. The eco-textile company Samatoa, which Delaval manages, produces lotus masks that meet the standards of both the United States’ CDC and France’s Association Francaise de Normalization, making them an effective alternative to plastic single-use face masks. Samatoa also values the tenets of fair trade and has made a positive impact on the livelihoods of poor Cambodians in the Battambang province. The company has provided employment that empowered thirty Cambodia women to be financially independent and provide for their families. According to Samatoa, the wages earned by company workers are twice what they would receive from other textile work in the country. Additionally, the company ensures that workers have access to a number of benefits, including trade union rights, paid leave and health insurance.

Nintendo Fights Poverty One Console at a TimeHunger in Albania: 3 Organizations Making a Difference
Scroll to top