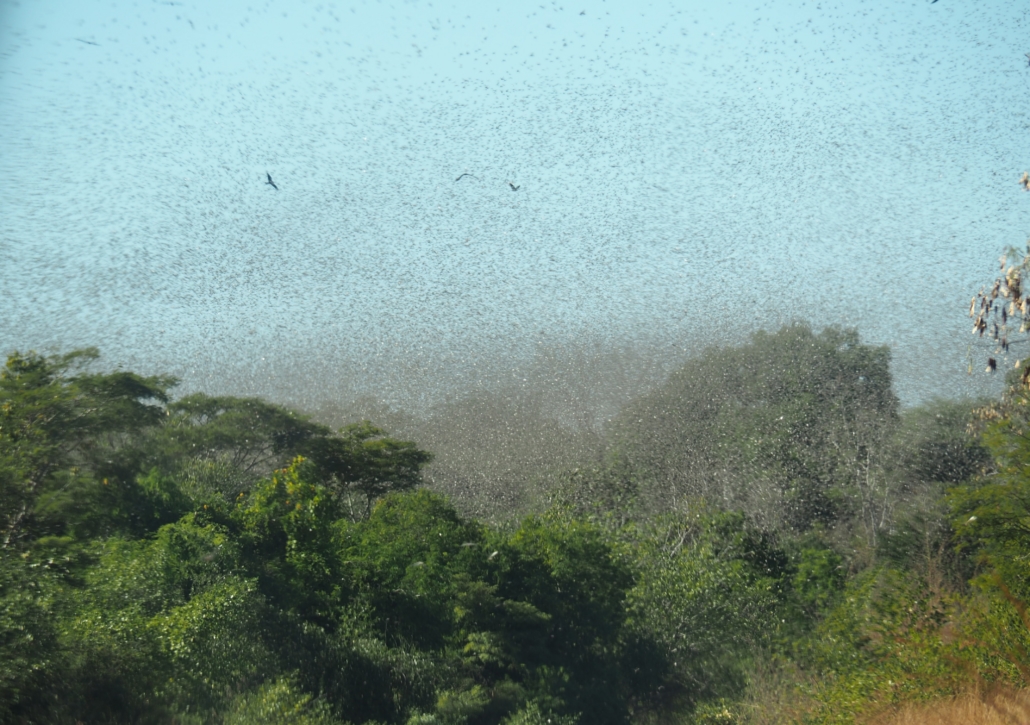 An apocalyptic scene—swarming locusts blanketing the sky. This is an image the world is mostly unfamiliar with. In fact, locusts are the oldest migratory pest in the world and are often associated with destruction.

A Snapshot of the Problem

There can be as many as 80 million locusts compacted into just a half square mile, and they bring with them devastating effects. In only one day, one square kilometer of these pests can destroy the agricultural produce that could sustain 35,000 people. The FAO states that during plagues, like the ones that occurred in East Africa during 2020, locusts can damage the livelihood of a staggering 1/10 of the world’s population.

Locust migration occurs in a cycle of boom and bust. This biological uncertainty makes it hard for countries to garner the funding, political will, knowledge and capacity to proactively address the threat through long-term infrastructure. However, failure to detect and control locusts proactively can result in devastating plagues. These can require millions of dollars to address and have catastrophic effects on food security, particularly in East Africa. The experience of one Somalian farmer portrays the catastrophic impact these pests have. Abdirahman Hussein Mohamoud relies on his farm to support his family. In May, he lost his entire $5,000 investment in crops to locusts. In his own words, his hard work “has all come to nothing.”

The FAO tries to combat the threat of locusts through early detection and warning with its Desert Locusts Information Service. USAID works towards strengthening the government’s capacity to address the threat of locus proactively in addition to the $19 million of US humanitarian response to reduce the size and impact of swarms. However, there is still an overwhelming lack of policies addressing locusts in East African countries. For this reason, there is a heavy reliance on pesticides for rapid response.

The use of pesticides, while incredibly effective for killing locusts, can negatively impact the health of humans and the environment. In Uganda, desert locusts are a common food source and the people often consume them immediately after the use of harsh pesticides. A number of community health advocates are raising concerns with the lack of adequate training and information on the potential impact these pesticides can have on human health. Executive Director of the Mpala Research Centre in northern Kenya, Dino Martins, warns that mass spraying can harm biodiversity as well. Martins points to the need to create more sustainable alternatives to controlling locusts such as biopesticides of pheromones.

While locusts pose a major threat to food security in East Africa, COVID-19 has made poor communities even more vulnerable. Resources for aid are stretched thin with a high priority on coronavirus relief. Despite this, countries in East Africa have maintained the control and monitoring of desert locusts as a national priority.

However, the slowdown in the global supply chain and cross-border mobility is raising concerns about the difficulty of acquiring pesticides for controlling locusts and protecting food security in East Africa. In March, an order of pesticides from Somalia to Ethiopia was delayed due to cargo flights being cut back. This showcases the dangerous impact COVID-19 can have on controlling the epidemic of locusts. Cyril Ferrand, the FAO’s Resilience Team Leader for East Africa, states access to pesticides is the biggest challenge facing their ability to control the impact of these pests.

Governments are exempting restrictions on movement for locusts control groups, recognizing their need to continue work. The FAO has stated they have been able to continue their efforts despite restriction. For instance, they have been able to treat more than 240,000 hectares with pesticides in East Africa. FAO has also trained 740 people on how to conduct ground control operations for locusts. So far, FAO has raised half of the $300 million it expects to need for pesticides.

The Benefits of Mushrooms in Fighting Poverty Hunger in Botswana: Causes and Prevention
Scroll to top