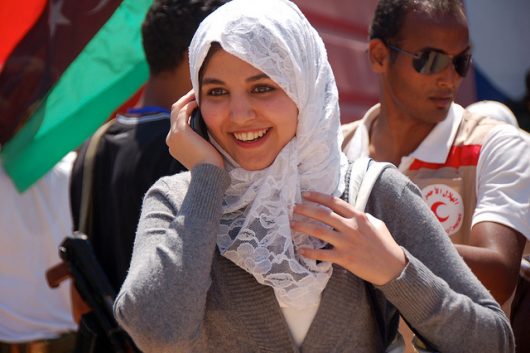 Desperate citizens of Libya, especially in the country’s capital Tripoli, are using Libyan social media in a unique way. The people of Libya send helpful information that might say something like, “red light,” to signal an area where militia is fighting or perhaps even taking people for ransom.

The country has been hit with turmoil and danger, as they are three years into their civil war, and is fraught with economic collapse and militia violence. The country is mostly ungoverned, and without safety or regulations being taken, human trafficking and poor treatment of migrants is becoming common.

The citizens on Libyan social media have created groups on Facebook to exchange helpful information on things like where to find petrol stations containing supplies, banks with currency and medicine. The posts also let people know occurrences of danger and violence, and areas of caution.

The militia recently shut off water valves that pump water to the city from the large underground reservoirs in the Sahara; as a result, the residents are desperately looking for water bottles, drawing water from ancient wells and drilling through pavement to get access to water. This can be contaminated water and could potentially cause an outbreak of waterborne diseases. Thankfully, though, social media has been a resource outlet for people to find places with safe drinking water.

With all of the complications and fears the country faces, Libyan social media has become a successful way to quickly spread crucial information about the current situation. Many migrants look to the Facebook groups to warn them of certain areas where it is more likely to become subject to sexual abuse or sold as slaves.

Help came to the country through the installation of the International Organization for Migration, an organization that plans to carry out numerous strategies for evacuating migrants. The effort of relocating people safely is dangerous and difficult due to the lack of government safety, but the use of Libyan social media has played a significant role in successfully aiding others in the meantime.