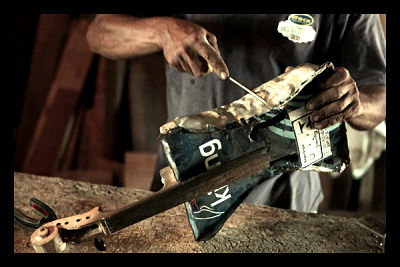 ‘The world sends us garbage. We send back music,” said Favio Chávez, the conductor of the Landfill Harmonic Orchestra.

The Cateura Dump, in the Bañado Sur area along the Paraguay River, is surrounded by seven neighborhoods. 2,500 families live in these neighborhoods, and the majority rely on the landfill to survive, sorting through the 1,500 tons of waste delivered daily and reusing whatever can be found. Poverty has forced many children to work with their families instead of attending school, resulting in inadequate education and a low level of literacy. The area also faces frequent flooding, as well as problems with sanitation and clean drinking water. It is from these troubled beginnings that the Landfill Harmonic originated.

Whilst working in the area, Favio Chávez, an ecological technician decided to teach music to some of the children. Chávez had previously trained as a musician and initially used his own instruments to give lessons. But he soon had too many students and not enough instruments. It was then that the idea to create instruments from recycled materials first struck him. The result was “Los Reciclados” (the Recycled Orchestra) was born using oil cans and scavenged wood, forks and kitchen utensils to create orchestral instruments.

Since its beginnings, the Recycled Orchestra has toured the world, performing in Argentina, Brazil, and Germany, and will be the subject of an upcoming documentary, “Landfill Harmonic.” And while the orchestra may have been created to “educate the world and raise awareness,” as Chávez says, the profound impact on individual lives is very apparent. Chavez continues, “…even though these students are in extreme poverty, they can also contribute to society. They deserve an opportunity.”

One of the orchestral members stated, “My life would be worthless without music.” For children living in poverty, and in an environment where the potential for education and advancement is slim, being given the opportunity to study music and travel the world can be invaluable.

Rebels and Refugees in the DRCRed Nose Day – What is it?
Scroll to top