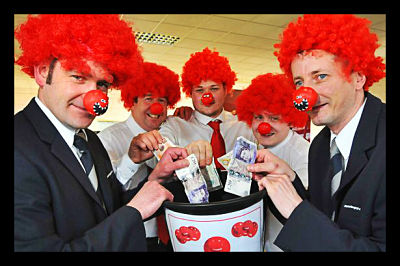 For celebrities and average Joes alike, Red Nose Day is a great chance to make a complete fool of yourself. The idea, originating in the U.K. and supported by the BBC, is to take one day every other year to donate some of your time, humor, and your nose to help change lives across the U.K. and Africa. Wearing red noses, thousands of people across the United Kingdom take to “comic relief” (also the name of the organization behind Red Nose Day) as a way to raise money for households in need.

The U.K. audience is no stranger to those laying it all on the line for a laugh. So, it’s no surprise when even the more serious celebrities, including David and Victoria Beckham, take to donning red “badges” of courage and let themselves be the butt of a little sporting humor. The famous couple was interviewed by Ali G, or Sacha Baron Cohen, to raise a few bucks for the cause and hilarity ensued.

But the day is not reserved for the wealthy or famous. Young and old people across the U.K. get together to raise money by hamming it up on and off the stage. From schools and grocery stores, to a live comedic set on the BBC Red Nose night, few public spaces and TVs are safe from the do-gooders and their jokes. This year, the day saw contributions accumulating to well over 100 million pounds.

Although Comic Relief and Red Nose Day donations go to fund projects worldwide, the vast majority of money is centered on projects in the U.K. and Africa. Generally, the issues addressed by these projects concern poverty and social justice, but also include mental health and asylum causes, among others. Every four years, the funding structure and program investments are reevaluated to accommodate change in the world and the local communities in which these projects take place.

On a rolling basis starting September of this year, Comic Relief accepts grant applications to receive funding for potential projects. The 2009-2012 funding cycle just ending, so now is the time for organizations to apply for these grants. So, if you have an idea that you would like to pursue, check out the application process here.