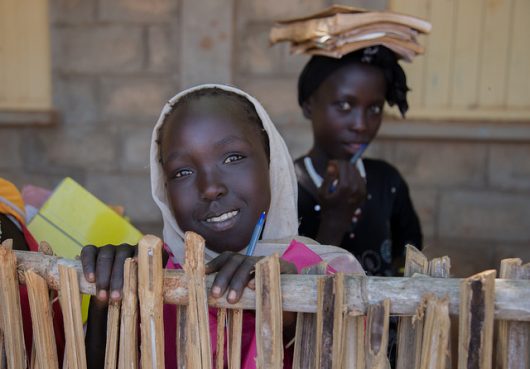 The connection between lack of education and poverty is of a cyclical nature, with each one leading to the other. Documentation of how lack of education creates poverty dates as early as the 1966 publication of the Coleman Report, as this report demonstrated that, when compared to their middle and upper-income counterparts, lower income students were less likely to perform well in school.

When looking at the connection between education and poverty, it is essential to consider a variety of factors, including health and women’s empowerment. Since each of these factors is improved when people are better educated, improving these factors then helps to decrease global poverty.

Additionally, children of educated mothers are over twice as likely to live to the age of five than children of uneducated mothers. Statistics documenting the link between education and health — specifically the health of women and mothers — also demonstrate how education improves women’s empowerment.

Young girls who are educated are less likely to marry at a young age. This fact means that they have a higher chance of entering into the workforce and not relying on their husbands and families for financial support. Women’s empowerment through education is another factor that demonstrates how lack of education creates poverty.

Women who are educated are able to develop better decision-making skills which allow them to succeed in the workforce. For women who are educated beyond grades three and four, each additional year of education leads to 20 percent higher wages, a fact that clearly demonstrates the link between education and poverty.

Research clearly indicates that if people lack the basic skills to read and do simple math, they will be less likely to get a job. An inability to get a job creates a clear pathway to poverty; however, lowering school fares and increasing investment in the education sector are key ingredients in improving the amount of educated people.

Between the years 2002 and 2007, an estimated 40 million more children were able to attend school, according to the Global Campaign for Education. This increase in educational attendance was due to a variety of factors including lowering school fares in countries such as Kenya, Tanzania, Uganda and Burundi, and the increase in investment in education in Latin America.

Though many people claim that poverty is what causes poor education, they fail to recognize the complicated cyclical nature of the dilemma as a whole. In fact, many studies demonstrate how lack of education creates poverty. With the proper investment in education, more people can have access to education, enter the workforce and not fall into poverty.