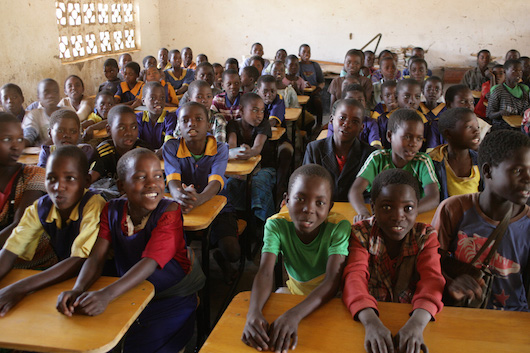 Millions of children throughout Africa struggle to learn while sitting on dirt floors or the ground outside for hours at a time. In Malawi, three out of five students don’t have a desk or chair.

Since 2010, Kids In Need of Desks (KIND) has placed more than 148,755 desks in 575 primary schools in Malawi, providing actual workspaces to nearly half a million students who would otherwise be sitting on the floor. The fund has also provided over 718 scholarships to girls to complete all four years of high school.

KIND also benefits the Malawian community outside the classroom. Every desk made for Malawian children is manufactured locally. This has created numerous jobs for residents over the past five years.

The fund was created by MSNBC’s Lawrence O’Donnell after a 2010 service trip to the country. There, O’Donnell learned firsthand that the number one item Malawian school teachers said would best improve the lives of students was desks.

According to Malawian teacher Saulos Mzuwala, “In as far as education is concerned a learner is more comfortable sitting at desks than on floors. They use their knees as desks which leads to poor handwriting.”

Students too, complain about the difficulty of learning and practicing writing from this position. “We fold our legs when we’re sitting and when we try to write, our papers get damaged and that wastes a lot of our time. It’s distracting and makes it hard to do well in school,” says student Lajab Saidi.

On top of this, sitting on the floor makes their clothes dirty faster, says teacher Nema Samalira. “It’s hard for these kids to afford soap especially if they have to clean their clothes every day. If their clothes are dirty they don’t come to school.”

During that trip, O’Donnell connected with UNICEF and a Malawi woodworking shop. He paid for them to make 30 student desks. With three kids to every desk, that first delivery enabled 90 students to move from dirt floors to desks. This change happened within a single week. Now, five years later, the KIND fund has received more than $10.5 million in donations.