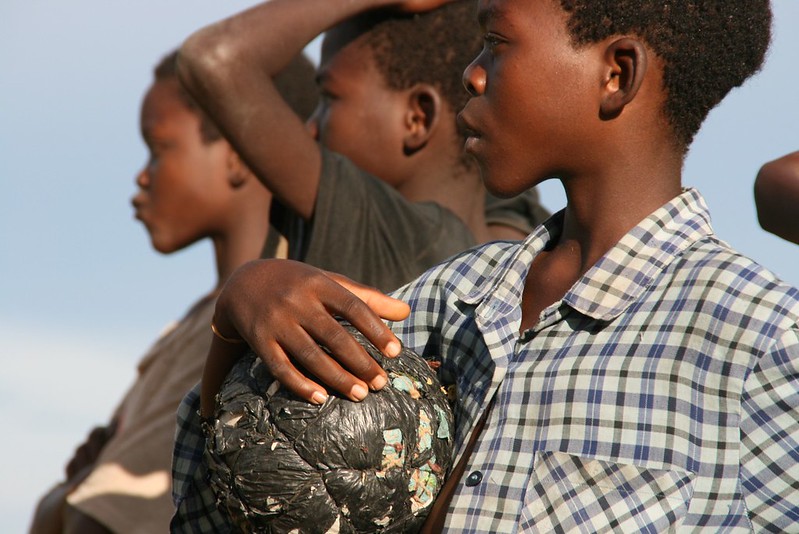 The International Trade Center and UEFA Foundation for Children have partnered up to teach children entrepreneurial skills through football in developing countries. This initiative came about through a need for children in poverty to overcome external hiring factors, such as skills mismatch or a lack of financing. Worldwide, 59 million teens and children face unemployment and almost 136 million are employed yet still living in poverty. Football is an ideal conduit to address these issues because it is increasingly recognized as a sport for community development and addressing social issues. This program, Kick for Trade, uses the sport to teach life skills in developing countries, including Angola, Cameroon, the Democratic Republic of Congo and Uganda.

The Kick for Trade curriculum was unveiled in August 2020 at UEFA headquarters to honor International Youth Day. The program had initial pilot projects in Gambia and Guinea in 2019, and after its success, Kick for Trade planned additional projects to take place in Angola, Cameroon, the Democratic Republic of Congo and Uganda. Unfortunately, COVID-19 derailed Kick for Trade’s plans in these countries. However, countries can expect the program to take off as soon as it is safe to do so.

Once implemented, the program will feature trained life-skills coaches who will teach 11 sessions each on youth employability and entrepreneurship. The goal of the program is to teach skills like leadership and teamwork to children through football in developing countries. Specifically, the life skills of problem-solving, creative thinking, communication, interpersonal skills, empathy and resilience. The lessons require minimal equipment, making the program accessible for any child who would like to learn life skills in order to become more employable.

Kick for Trade is expected to teach 1,500 children employment skills throughout the selected countries. UEFA has helped 1 million children worldwide through its various programs since its creation five years ago. These programs span 100 countries, reaching all five continents. The specific Kick for Trade programs in developing countries will highlight different targets depending on the country.

These programs will roll out once it becomes safe enough to do so amid the COVID-19 pandemic. Hopefully, these programs will continue to positively benefit children looking for employment in developing countries.