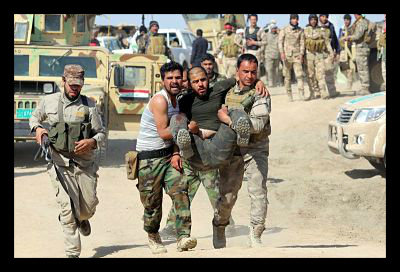 Iran joined forces with the Iraqi military on Monday, March 2 in an operation to reclaim Tikrit from the Islamic State. The incident involved throwing drones, heavy weaponry and ground forces.

The U.S. and Iran have both steered clear of each other’s operations in Iraq, according to U.S. officials. In general, when Shiite militias are involved in a military operation, the U.S. doesn’t provide support.

Approximately 30,000 fighters participated in the offensive, nearly equal in numbers between Iraqi military fighters and Shiite Iranian volunteers. Sunni and Shiite officials both emphasized that a smaller contingent of 1,000-2,000 Sunni tribal fighters native to the Tikrit region would assist the government in the battle.

“Tikrit is a crucial strategic area and it represents the key for the liberation of Mosul itself,” said General Abdul Wahab al-Saidi, the commander of the Tikrit operation.

The Islamic State, also known as ISIS, took control of Tikrit last summer during a dramatic assault. Monday was Iraq’s third attempt to regain control of Tikrit, located on the Tiger River northwest of Baghdad. Previous operations failed most likely due to failed communication between the Iraqi fighters and Shiite volunteers.

The United Nations has stepped in to help the thousands of people who have been displaced from their homes or had their homes destroyed in the fights. Many children do not attend school anymore or partake in responsibilities and jobs at home.