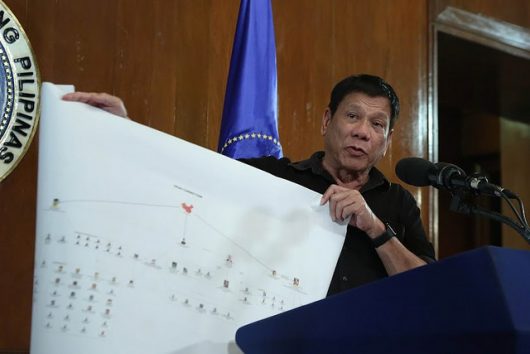 After being elected President of the Philippines in June 2016, Rodrigo Duterte quickly declared a “war on drugs.” As a result, there have been more than 12,000 casualties to date with the majority of victims being the urban poor.

How the “War on Drugs” Began

During his presidential campaign, President Duterte classified drug dealing and addiction as barriers preventing economic and social advancements for the country. Following his presidential election win, Duterte said, “go ahead and kill” drug addicts, which has been taken literally by the public. Suspected drug dealers and addicts became victim to vigilante attacks and police began conducting large-scale raids in Manila, Philippines.

Unfortunately, substance abuse is not uncommon in the Philippines. Marjoree Razal, a former resident of Manila, Philippines told The Borgen Project: “There are a lot of drug addicts and some children will begin using drugs at a very young age.” In fact, there are about 1.8 million drug users in the Philippines, and “shabu,” a form of methamphetamine, has been the most common drug of choice. According to a 2012 United Nations report, The Philippines had the highest rate of methamphetamine abuse in East Asia.

The “War on Drugs” Has Resulted in Human Rights Violations

According to data gathered by The Philippine Drug Enforcement Agency (PDEA), between July 2016 and September 2017, the police had already caused the deaths of 3,906 alleged drug users and dealers. Thousands more have been killed by masked gunmen who were disguised police officers or hitmen working with police.

Razal said, “These killings did not become common until President Duterte took office. Most of the recent killings have been ordered by him.” An investigation conducted by The Human Rights Watch (HRW) uncovered that PNP has been continuously conducting extrajudicial killings of potential drug suspects and falsely declaring self-defense. Police are also guilty of planting weapons, ammunition and drug packaging on victims’ bodies to incriminate them of drug activity.

According to Peter Bouckaert of HRW: “The way the targeting takes place is that each community has to compile a list of drug users that is known as the “watch list.” From those lists, people are targeted for either police operations or they’re simply killed by unidentified gunmen.”

Since most of the extrajudicial killings have been done in Manila, Philippines, the urban poor population is being directly impacted as a result. Thousands of children have become orphans or are now living in single-parent households because of Duterte’s crackdown on drugs. Razal said, “It is not unusual for the government to mistreat the poor since the country thrives on money and power.”

The Effects of The War On Drugs

Rhoda, a 29-year-old widow, became a single parent after her husband was killed by police in the drug war. Rhoda now supports seven children by herself, but health problems prevented her from working last year. Since then, she has found a job selling beauty products and earns 4,000 pesos per month ($212).

Many children under age 18 have also died in the drug war since June 2016 because they were either with someone who was being targeted or, it has been suggested, were actual targets themselves. According to the Children’s Legal Rights and Development Center, at least 54 children have been killed by PNP or masked gunmen since July 2016.

In response to the killings of children, Duterte said there would be an investigation to hold the officers accountable; however, no investigation was ever launched, and the officers in question are still on active duty. In fact, to date, nobody has been prosecuted for any of the extrajudicial killings.

Additionally, the Philippine judicial system is considered to be corrupt and works very slowly. Since drug dealers and addicts are a stigmatized group, it is difficult for them to receive any political support even when there is no evidence that proves they took part in drug activity. President Duterte claims “The war against illegal drugs is far from over” and vows it will continue until 2022 despite the opposition.

The Catholic church has formed a campaign against violence in efforts to help and provide shelter for victims. The St. Francis of Assisi and Santa Quiteria Parish in Caloocan, Philippines created a drug rehabilitation program as a nonviolent approach to combat the country’s illegal drug problem.

Rev. George Alfonso, a priest of the parish said: “We are not denying that drugs are a problem in our society. But instead of acting about the war against them, we decided to do something to help the person.” The church believes that addiction is a result of a social issue, not just an issue of crime.

Furthermore, during the June session of the Human Rights Council, 33 states are calling for the end of extrajudicial killings along with an investigation into those behind the acts. Several “unofficial” investigations have been started to look into the extent of the human rights violations that have occurred so far.

Since President Duterte’s removal of PNP from anti-drug operations, extrajudicial killings have declined, but continue to occur. Instead, the government needs to adopt a policy for addressing drug-related issues that is non-violent and improves public health in order to limit the spread of diseases from certain kinds of drug use such as HIV/AIDS, tuberculosis and hepatitis.

By adopting harm-reduction measures, like education and access to rehabilitation, the amount of violence in poverty-stricken areas will begin to decrease and potentially bring about improved relations between the government and its people.