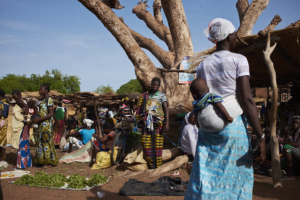 AGOA is U.S. legislation approved in May 2000, to support sub-Saharan African economies and improve economic relations between those countries and the U.S. The AGOA provides sub-Saharan African nations with U.S. duty-free access to more than 1,800 products. That allowance is beyond the more than 5,000 duty-free products under the Generalized System of Preferences program.

Political instability and limitations in both trade and humanitarian aid are not new issues in Burkina Faso. In fact, the September coup was the second one in 2021. Army captain Ibrahim Traore seized power from military leader President Paul-Henri  Damiba in September, citing “his inability to deal with an armed uprising in the country that has worsened in the past nine months.” However, Burkina Faso was already experiencing effects from the first coup, in which Damiba orchestrated an uprising against President Roch Marc Christian Kabore in January. At that time, the U.S. paused a $450 million aid effort.

The political instability in Burkina Faso could exacerbate already desperate conditions. During seven years of radicalized military terror with connections to ISIL and al-Qaeda, the hunger crisis intensified. In fact, the United Nations has even reported that “the humanitarian situation in Burkina Faso has become so dire that some women and children have eaten only leaves and salt for weeks.” U.N. Under-Secretary-General for Humanitarian Affairs and Emergency Relief Coordinator, Martha Griffiths claimed that “Growing insecurity and blockades in many areas have left communities cut off from the rest of the country and facing growing hunger. Aid workers are struggling to reach these people who need assistance.”

Economic and Military Impact of Political Instability in Burkina Faso

The removal of Burkina Faso from the AGOA is particularly relevant for those concerned with U.S. legislative foreign aid decisions because legally if the U.S. State Department determines a democratically-elected government experienced an unconstitutional removal, the U.S. must suspend all non-humanitarian aid. Importantly, the U.S. is Burkina Faso’s largest international donor.

Burkina Faso also lost access to the markets of Economic Community of West African States (ECOWAS) markets. ECOWAS is the trade union of West African states and it strongly condemned the coup and pushed for elections as quickly as possible.  It claimed that Burkina Faso was close to restoring constitutional order so the coup was incredibly “inopportune.” Journalist Sam Mednick  claimed, “If Traore is not going to be able to show tangible progress quickly, people say he’s going to be ousted just like his predecessor.”

Militarily, the U.S. also provides surveillance, intelligence, air support to the French who intervened against militants in the Sahel. The U.S. also provides intermittent training to Burkina Faso’s security forces. Elizabeth Shackelford, a senior foreign policy fellow at the Chicago Council on Global Affairs suggested that because military support has not proved productive, the U.S. and its partners should put funding and effort into supporting democracy-fostering institutions.

Luckily, the European Union (EU) is still earmarking funds for aid in Burkina Faso. Specifically, the EU has set aside 52.4 million euros to address food insecurity, malnutrition, water, sanitation, hygiene, education and disaster preparedness. International non-governmental organizations will also still be able to provide aid. For example, Save the Children focus on Burkina Faso education, public health and protection. Specifically, for public health, Save the Children advocates for “universal access to health care and an increase in the health budget.” In regard to nutrition, it supports food assistance programs. For malnutrition, it provides screening and long-term care for affected children and families.

Outlook for the Future