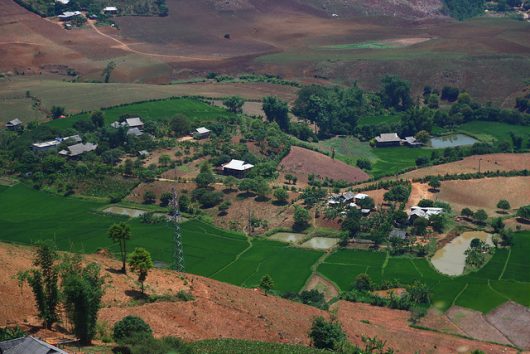 Although the infrastructure in the Solomon Islands has improved with financial support gained from minor tourism and the help of other countries invested in the islands, there is still much more that can be done.

The country lies on the Pacific’s “Ring of Fire.” Frequent volcanic and tectonic activity produce earthquakes and tsunamis plague the islands, and destructive events like these mean that the infrastructure in the Solomon Islands often requires maintenance and rebuilding.

Since the country is composed of many islands, the main transportation used in the Solomon Islands is by boat, but there is a small road network throughout much of the islands as well. Much of this road system is unpaved and often requires maintenance and rebuilding due to both heavy rainfall and natural disasters. Although the building and maintenance of this road system are controlled by the government, much of its funding comes from foreign support.

As of 2012, the road network on the Solomon Islands is moving towards a more weatherproof system. Funded by the country’s government as well as foreign aid from countries such as Australia and New Zealand, some roads have been paved and bridges made from material that can better withstand the rainy climate and extreme weather conditions. In addition, the rebuilding of road infrastructure also provides the people of the Solomon Islands with many jobs.

Much of the structures on the Solomon Islands are minimal and basic. Homes and buildings are also threatened by the frequent natural disasters that hit the island.The towns where these homes and structures reside often lack any form of electricity. Only major towns such as the capital, Honiara, have access to power; even then, electricity is minimal and mainly provided by diesel generators.

Lack of electricity also means that the many of the people living in the Solomon Islands do not have access to what other countries would consider necessities i.e. communication via telephone and cellphone, and the ability to use the internet, watch television or even listen to a radio.

Having one of the lowest access rates to electricity in the world, power has been something the Solomon Islands has been trying to implement in their communities for many years. Often, the only way the Solomon Islands are able to improve access considerably is with the aid of other countries.

Many improvements to the small power grids in the country have been made through foreign investment. A notable instance of this occurred in 2014 when the U.S.-based organization, the World Bank, financed $13 million for electricity improvement in Honiara. This money was given to the Solomon Islands Sustainable Energy Project (SISEP) to help improve the efficiency and reliability of the already existing power grid, as well as expand its reach.

With the support and investment of other countries, the infrastructure in the Solomon Islands is slowly improving and persevering against harsh natural conditions. Not only does financing infrastructure on the islands help its people by improving their living conditions, but it also provides them with jobs and more stable incomes.

As the infrastructure of the islands improves, it also allows the country to become more open to tourism. Receiving profit from tourism means that the island can continue to grow and aid both its people and many other investor countries.