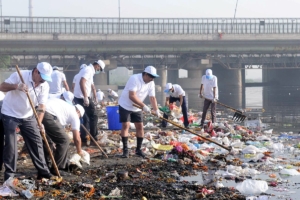 India’s water crisis is a struggle that millions of people are facing. As summer approaches, bringing heat waves and dry spells with it, the necessity for clean and accessible water is extreme. In May 2022, the city government of New Delhi proposed an action plan to provide sewage connections to more than 25,000 houses in East Delhi. The proposed plan also emphasizes taking steps to clean the Yamuna River, which snakes through India’s north-central region. Delhi’s vision of a clean Yamuna River offers an optimistic gaze into India’s future.

India’s water crisis is an ongoing struggle. Underdeveloped infrastructure and an unstable agricultural sector due to land infertility and increasingly severe droughts have brought the crisis on. Groundwater depletion occurs at alarming rates due to over-usage of water, and extreme pollution causes water contamination. A prevalence of arsenic, sulfur and fluoride is in the water people are consuming. In 2017, researchers from the WHO/UNICEF Joint Monitoring Program (JMP) reported that more than half of India’s population does not have access to potable water. India’s water situation fuels health concerns and hinders agricultural production and employment, trapping an increasing number of people into poverty.

A glance at India’s longest tributary, the Yamuna River, offers a dire look at the nation’s struggle for clean water. The Yamuna flows south through Delhi, where an estimated 80% of the pollution comes from. Beyond the floating piles of trash that collect along the shores, evidence of polluted water comes in the form of froth. Detergents and other chemicals in the untreated water that goes into the river produce these buildups of foam. The pollution entering the river from Delhi flows south into the states of Haryana and Uttar Pradesh, India, putting more people at risk.

Despite the water crisis, Delhi’s population has had immense growth in recent years. Researchers with the U.N. Department of Economic and Social Affairs (DESA) have estimated that New Delhi, India’s capital, will be the most populous city in the world by 2028. With over 30 million already living in New Delhi, the Indian government recognizes the necessity of providing clean water to its people. An uphaul of India’s water infrastructure could drastically improve these conditions and provide more Indians with this essential human need.

Representatives from the Delhi Jal Board (DJB), New Delhi’s official water agency, have offered considerable methods of combatting the excess of unpotable water. In May 2022, officials devised a plan that would provide around 25,000 free sewage connections to households in East Delhi constituencies like Mustafabad and Karawal Nagar, located near the banks of the Yamuna River. This is a beneficial move for DJB during a time when water meter scams have become extremely prevalent in India. Providing additional sewage connections, especially in Delhi’s many low-income colonies, would also diminish the amount of untreated water escaping into the Yamuna.

Free sewage connections are not the only benefit to come from this plan. If implemented, DJB will construct approximately 30 reverse osmosis (RO) plants around Delhi. These manufacturing plants desalinate and purify water by separating and collecting the contaminants within it. DJB officials plan to implement many of the RO plants throughout Delhi’s numerous Jhuggi-Jhopri (JJ) clusters. These clusters illegally house some of the capital city’s most impoverished under mud roofs along the streets and passageways of slum colonies. Each RO plant can serve up to 65,000 liters of clean water daily. Officials have set a goal to place around 1,000 RO plants across Delhi in the future.

The Yamuna River gives a sweeping view of India’s water crisis. It offers unmistakable evidence of chemical contamination with froth buildup and trash. Most importantly, though, is how the Yamuna cries out on behalf of the multitude of people in Delhi who lack the basic amenity of clean water.

DJB’s actions to improve water quality in New Delhi fall under a six-point action plan devised to clean the Yamuna River by 2025. Delhi chief minister Arvind Kejriwal announced the plan in November 2020, referring to the Yamuna as “the lifeline of Delhi.” These are the six points of action:

Years of neglect toward the Yamuna River has had damaging effects on Delhi’s people and landscape. Thankfully, the government is making resilient efforts to rehabilitate the Yamuna and quell India’s water crisis.