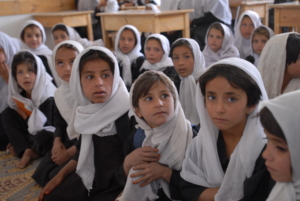 Conflict in Afghanistan has persisted for more than two decades, with active U.S. involvement starting in October 2001. Political instability, violence, and persecution led to the displacement of more than 360,000 people in 2017 alone. This displacement causes a lack of stability in employment, shelter, food, and education, In times of ongoing conflict, safety becomes the top priority, and education is largely neglected. While conflicts must be resolved, improving access to education in Afghanistan is critical to enable this nation to reduce poverty and improve overall quality of life.

While the lack of access to education in Afghanistan stems from a range of political and social conflicts, there have also been direct attacks on girls’ education. UNICEF reports that around 3.7 million children are not enrolled in school in Afghanistan, and girls make up 60 percent of that number. Terrorist groups such as the Taliban specifically target girls’ education institutions because they believe women should not be educated.

According to Human Rights Watch, bombings and acid attacks are not uncommon forms of violence at girls’ schools. In Kandahar, one such attack in 2008 that injured 15 girls led many families to prevent their daughters from attending school. Fear of violence is a prominent reason that many girls in Afghanistan do not receive an education.

Besides targeted attacks, girls are less likely to attend school for cultural reasons, including expectations to marry at a young age and raise children. The demand for teachers and schools remains relatively low, as geographic barriers such as terrain, climate, and location effect school attendance. According to UNICEF, only 48 percent of teachers have attained the minimum required qualifications to teach. As conflicts continue, expanding access to education in Afghanistan will be difficult. International policies such as the Safe Schools Declaration, which protects education during violent conflict, can help encourage children to attend school. Foreign aid can also provide resources to give teachers better training and updated classroom materials.

How Can Education Reduce Poverty?

Improved access to education will profoundly impact Afghanistan’s poverty rate and overall economic health. Education is critical to “break the cycle of poverty,” as ChildFund International states. Educated individuals are more likely to hold jobs, which increases economic security and can help lift people out of poverty. Children with educated parents or caregivers are more likely to attend school, which can help ensure economic security in the future.

In Afghanistan’s Yakawlang District, the Rustam School teaches 330 girls and 146 boys–a sign that education access is improving in some parts of Afghanistan. The Rustam School had a 92 percent college entrance rate in 2017. This school’s success is possible due to the Taliban’s exit from the area surrounding Rustam School, making parents more willing to send their children. The school inspires children to pursue careers that have higher earning potential than the agricultural work common to families. If more institutions in Afghanistan can follow the Rustam School’s example, perhaps education access will expand for both girls and boys, and a new generation of educated citizens will help to stabilize Afghanistan’s politics and expand its economy.