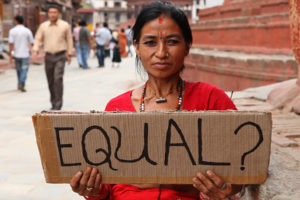 In 2015, a 7.8 magnitude earthquake struck the South Asian country of Nepal, killing 9,000 people, injuring 168,00 more and destroying tens of thousands of homes. The tragedy and ongoing reconstruction that followed sparked the scarred nation to adopt a new constitution. This act is in an effort to create more transparency and equality. However, Nepal’s traditional society that remained provided little support for the lower class including women. USAID has stepped in to aid with reconstruction and support Archana Tamang as a USAID-funded gender and social inclusion (GESI) advisor to the government. She wants to ensure that women, as well as other marginalized people, have a voice in creating a sense of inclusiveness in Nepal and helping lead it into the future.

A History of Gender Inequality and Violence

Women, especially those from lower castes in Nepal’s Hindu culture, have little opportunities for education, health care and work outside the home. A woman has no choice but to marry into what are often arranged marriages that define her life. Husbands control the family resources leaving women often shunned and impoverished should they be divorced or widowed. These marriages can often be oppressive and even abusive.

“During the first earthquake in 2015, Archana was traveling to Afghanistan for work; but the quake ‘was a real wake up call.'” Tamang’s choice to fight GESI issues is inspired by her experience. She got married at the early age of 17 to a man from India. Tamang lived with emotional and physical abuse for five years before escaping back to Nepal with her daughter. In Nepal, she later became involved in GESI efforts. She was working in Afghanistan when the earthquake hit and quickly returned to her home to help rebuild.

On the Road to Change

The National Reconstruction Authority is the sector of the Nepalese government that has overseen rebuilding after the earthquake. As Nepal’s government moves toward a more transparent leadership, the National Reconstruction Authority had pledged to help defenseless populations. However, a focused approach was lacking. Tamang developed a research-supported GESI Action Plan for the government where she would “empower women and ensure that they were able to earn a living.”

Tamang makes it her mission to visit women and other powerless people in their home villages to educate them on their liberties and duties. She wants to make sure they are heard in the reconstruction process. Her GESI Action Plan mandates that at least two of five posts in local governments are to be held by women. Plus, women make up at least one of two mayoral or deputy mayoral candidates in each Nepal district. The plan has also called for women to get paid the same as men for their labor helping to rebuild, further nurturing inclusiveness in Nepal.

A Future for Inclusiveness in Nepal

In 2017, Nepal had its first election in over 20 years under the new constitution and more than 1.7 million Nepalis — most of whom were women and lower-class people — registered to vote for the first time. The elections brought more than 14,000 women into government. This demonstrates the effectiveness of Tamang’s Action Plan to the point where it received full government financial support. She is happy to report that in 2019, 40% of elected officials were women. In addition, more and more girls are being educated and finding their voice to help heal their scarred nation.