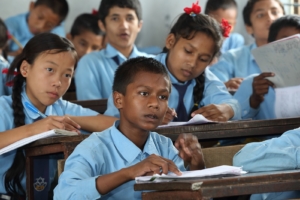 More than 420 million people would be able to escape poverty if everyone around the world attended primary and secondary education, cutting global poverty numbers in half, UNESCO estimated in a 2017 analysis. If all children in low-income countries learned to read, 171 million people would rise out of extreme poverty. While achieving high-quality universal education might seem like a lofty goal, simply giving parents more information about their children’s education has proven to be a straightforward yet effective method of improving global education outcomes.

One 2017 study that the American Economic Review published examined the effect of school report cards on educational outcomes in Pakistan. Pakistan is a lower-middle-income country where only 58% of people aged 15 and older can read and write. By the end of third grade, not even a third of students can write a correct sentence. For the study, the researchers, who consisted of two American professors and one World Bank researcher, randomly chose the students of 56 Pakistani towns to receive report cards while students in 56 other towns did not receive report cards. This study delivered two-page report cards to the families of children in selected towns. The report cards contained the child’s test scores, information about their child’s performance relative to other students and information about the performance of the child’s school.

In 2018, the World Bank published a study on the efficacy of different techniques for improving school attendance. The World Bank conducted its research in Mozambique, a low-income African Country where the literacy rate is only 60.7%. Fewer than one in five children in Mozambique attend secondary education and just 33.2% complete primary education. One of the techniques the researchers tested for improving school attendance rates was creating attendance reports for parents.

The researchers included 2,793 participants from 173 schools in their study. All the participants were girls in fifth and sixth grade at the start of the study. Study participants placed in the group with attendance reports would get a sheet indicating which days they had attended school to give their parents at the end of each week. To measure the effect of these attendance reports, observers would randomly check in on schools to see if the students participating in the study were present that day.

More than 600 million children around the world are unable to gain basic reading and math skills, UNICEF reported. While many of these children lack access to education, approximately two-thirds of them are in school and still are unable to gain a baseline education. Education access encompasses not only access to education but access to effective education. Research indicates that taking simple steps to improve parent information about schools by giving parents report cards about their child’s and school’s performance or giving them attendance reports contributes toward improving global education outcomes. Providing 600 million children with quality education will doubtlessly be a challenging task but, as this research indicates, simply providing parents more information about their child’s education could be a meaningful yet simple and low-cost part of the solution.