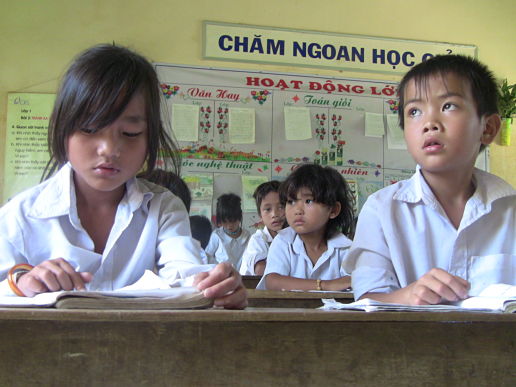 Vietnam has been making strides in its development over the past few decades; the country has seen a reduction in poverty and an increase in the standard of living. The Vietnamese government has invested heavily in its reformed education system, especially when it comes to literacy. Ninety percent of the working-age population is now literate and 98% of primary-school-age children are enrolled in school. The gender gap in education that plagues many other countries is nearly nonexistent in Vietnam, as the enrollment rates are comparable for boys and girls. Furthermore, 25% of college-age adults are enrolled in tertiary education.

These numbers are the product of many years of change in the Vietnamese education system. In the 19th and 20th centuries, the French colonized Vietnam, and very few citizens were able to attend school. With French considered the dominant language of the country at the time, nearly the entire population was illiterate. After Vietnam gained independence in 1945, the government began focusing on improving literacy rates and reforming the education system. Violent conflicts and economic crises made this difficult for many years, but the most recent decade has seen steady progress.

Vietnam first entered the PISA test in 2012. This test measured how 500,000 students from schools in 65 countries answered written and multiple-choice questions. Vietnam ranked 17th in math, eighth in science, and 19th in reading, thus outranking some developed countries such as the United States and the United Kingdom. These results were a positive surprise worldwide.

There has been much discussion about the reasons behind Vietnam’s recent success. The government has been focused on investing in the education system — 21% of all government expenditure is devoted to education. Furthermore, teachers have been traditionally highly respected in Vietnamese culture and they are expected to meet high standards and stay committed to professional development. However, there is concern that strong PISA performance does not tell the whole story.

While the enrollment rates are high for primary school, only 65% of secondary school-age students attend school. Poor or disadvantaged students often drop out, and their scholastic abilities (or lack thereof) were not reflected in the PISA scores. While more privileged students scored high, students who may have lowered the scores were left out of the picture entirely.

Some Vietnamese schools have the resources to focus on creativity and critical problem solving, but most encourage rote learning and memorization. These methods can result in impressive test scores, but do not serve students well once they are out of school. Sadly, corruption is also an issue in Vietnamese schools, particularly elite schools, which sometimes sell students places for extremely high prices.

Although the Vietnamese education system has a long way to go, the recent PISA scores are positive signs of things to come. In the long process of recovering from years of conflict, these reforms in the school system have brought about progress and a more educated populace. As Vietnam develops, schools can continue to improve and effectively serve students of all economic backgrounds.