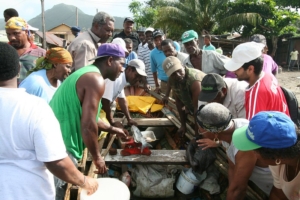 The Commonwealth of Dominica is a country located in the Caribbean, with a population of 71,808. Despite its small population, Dominica has a total poverty rate of 28.8%, according to the most recently available official data. However, the island, which is still recovering from the devastating effects of Hurricane Maria, may actually have a poverty rate as high as 43% according to a World Bank study.

The already struggling nation met yet another problem when the pandemic hit the island, with the impact of COVID-19 on poverty in Dominica bringing along serious problems for the island’s most vulnerable.

Impact on the Economy

According to the World Bank, the impact of COVID-19 on poverty in Dominica started with the economy contracting by 10% when the pandemic hit the island, in large part due to a halt in tourism earnings. Tourism makes up 25% of the GDP and is next to agriculture as the largest driver of Dominica’s economy.

The World Bank also stated that COVID-19 had only worsened the economy that was still recovering from Hurricane Maria’s impact on the nation’s agriculture industry. Both disasters have likely raised the poverty rate to somewhere around 43%, while the exact number is currently unknown.

The impact of COVID-19 on poverty in Dominica can also be seen in employment statistics. The steep decline in tourism earnings caused by the pandemic led to an unemployment increase in Dominica, according to OCHA. The tourism industry accounts for 32.9% of total employment in the country, and 58% of respondents in an OCHA survey reported losing their jobs. A similar percentage of respondents also noted that they saw increased food prices as a result of the pandemic.

According to the U.N. Development Programme, the most marginalized and vulnerable groups in the country are Kalinago indigenous peoples, rural citizens, women and children.

The impact of COVID-19 on poverty in Dominica was felt the hardest by women. Women in Dominica are the main income earners in 39% of the nation’s households; furthermore, 70.2% of workers in the food service and accommodation sector are women, meaning that the stop in tourism due to COVID-19 heavily impacts female workers. This would lead to many women being unable to support their families alone, and make them less likely to be able to provide for their children.

In response to the pandemic and the effects on poverty in the country, the government of Dominica started the Employees and Small Business Programme to provide financial assistance to those in need. The program offered grants to employees who were laid off due to the pandemic, as well as “self-employed sole trader businesses” who were in need of financial assistance. For both grants, eligible applicants were given monthly payments of EC$600 ($222) if they had “minor dependents under the age of 18” and EC$400 ($148) if they had no dependents.

According to Reuters, the island nation reported administering 66,992 doses of COVID-19 vaccines as of July 2022. Although the exact number of fully vaccinated persons is unknown, the amount of doses administered is “enough to have vaccinated about 46.6% of the country’s population.” The government also repealed testing mandates for tourists, allowing more tourists to visit the country ahead of the 2023 Mas An Lawi Carnival, creating jobs that had been lost due to the pandemic.

With the COVID-19 pandemic on the back burner, the GDP of Dominica increased by 4.8%, an indicator that the people and economy are currently on the road to recovery. The U.S. Peace Corps also welcomed back volunteers in the Eastern Caribbean in 2021, a sign of hope for the people who have suffered from disaster after disaster.