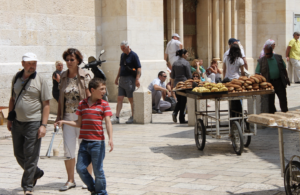 Palestine is a region in the Middle East comprising the Gaza Strip and West Bank, with much of the territory currently under Israeli occupation. Palestine already experiences a number of humanitarian crises and restrictions on goods such as food and natural resources. However, the pandemic means the areas must now solve the problems with both COVID-19 and food security.

Currently, out of the 3 million Palestinians that reside in the West Bank and the 2 million in Gaza, about 1.7 million of them experienced food insecurity in 2019, prior to the effects of the pandemic. Additionally, many children across the territory were already malnourished and in desperate need of appropriate nutrition. About 63% of children under 5 in Palestine were consuming a minimally diverse diet, and about 7.4% of children under 5 appeared to be chronically malnourished. There is also a gender discrepancy as food insecurity is higher among women than men. While overall 32% of families in Palestine that are suffering from food poverty happen to be led by women, this is particularly a problem in the Gaza Strip where it’s 54% of families.

After the Palestinian prime minister declared a state of emergency in early March due to a rising number of confirmed COVID-19 cases, the territory quickly entered into a lockdown. The subsequent effects of the pandemic and lock-down were drastic. It was extremely detrimental to the livelihoods of many Palestinians and impacted socio-economic development, employment and put many of them at an increased risk of experiencing poverty. It has put vulnerable communities who were already experiencing food and economic insecurity in an exponentially difficult position.

The outbreak has also affected food logistics, marketing and the production of certain commodities such as dairy, fruits and vegetables. Additionally, the implementation of social distancing measures and overall restricted movement has had a dire impact on farming and processing. Therefore, a major reason for heightened food insecurity in Palestine is the reduced availability of food. While experts are unsure of the full impact of COVID-19 on food security, it can be estimated that it will continue to ravage food systems in Palestine and those vulnerable populations will suffer the most. According to the Food and Agriculture Organization (FAO), it can be expected that up to 50% of the population might face severe food insecurity and this effect may be intensified if Israel follows through on its annexation plans. “The situation will be exacerbated if Israel proceeds with the plans to annex parts of the West Bank, further limiting access to core resources, like land and water, and agricultural livelihood opportunities.”

An Organization Working to Help

The issue of food insecurity persisted in Palestine long before the pandemic, and many organizations have been doing the work to address the problem within the region. One such organization is the World Food Programme (WFP). It has been providing food assistance to vulnerable populations in Palestine since 1991. The WFP focuses on areas such as the Gaza Strip and the southern parts of the West Bank – places where poverty and food insecurity are particularly pressing issues. As a response to the COVID-19 crisis, WFP has extended its efforts to the entirety of the West Bank and has also managed to provide “climate-smart agricultural assets”, such as hydroponics and wicking beds, to impoverished households.

Food poverty has been an all-consuming issue in occupied Palestine long before the COVID-19 outbreak. However, the pandemic has had disastrous effects on the socio-economic conditions of Palestinians – many of whom were already in vulnerable positions. While there are many troubling implications for how both COVID-19 and food security will continue to affect the livelihoods of socioeconomic development of Palestinians, organizations such as the World Food Programme continue to aid food insecure communities in getting the help they need.