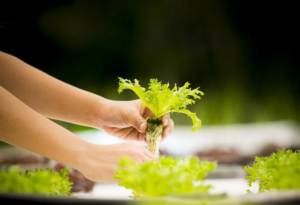 In India, more than 189 million people are undernourished, according to a 2020 report by the Food and Agriculture Organization (FAO). With India’s population quickly increasing, it needs to steeply greaten the amount of agriculture and food that it produces. However, a critical setback to the more than 118 million growers in India is the lack of water sources. Fortunately, hydroponic farming might be a solution to this issue.

A Look at the Statistics

There is a total arable land of 160 million hectares. According to the Agriculture Census, about 58.1 million undergoes appropriate irrigation. In 2010, irrigated land made up 35% of entire agricultural land, according to the World Bank. More than 163 million people lack access to a primary water supply in India.

Also, space and fertile land is a shortcoming that many farmers face. This inefficiency lowers India’s crop yields. The average vegetable yields in India are 17 tons per hectare, while the average in developed countries is over 40 tons per hectare, according to Re-Nuble.

To combat this limitation along with the hindrances coming from COVID-19, many Indian growers and companies are turning to hydroponic farming. Hydroponic farming is a soil-free, insufficient space, less water, reduced pesticide and fertilizer mechanism of growing plants. This form of agriculture is much more efficient, and it keeps plants resilient against the effects of droughts and global warming.

Hydroponic farms grow vertically or at lower altitudes. How they grow means they could easily be located in houses or small areas, avoiding the need for open land and soil. Due to its compact nature, this also allows for lower labor needs in harvesting and growing.

The Popularity of Hydroponic Farming

Amongst COVID-19, where many fear buying external produce, hydroponic farming has soared in popularity. Since it can grow in urban settings, sharing potentially dangerous plants is no longer necessary. The hydroponic farming systems also have high potentials for the future. The Indian market should grow at a rate of 13.53% compounded annually from 2020 to 2027. Globally, the hydroponics market will achieve $12.1 billion by 2025, according to the Transparency Market Research.

Furthermore, many Indian companies have taken it upon themselves to start up hydroponic centers in cities across the country. A prime example of this is Future Farms, a Chennai-based startup. It grew to $1 million in worth under the guidance of Stanford Seed, an initiative aiming to eliminate global poverty through enterprises.

Future Farms’ hydroponic farms have reduced water consumption by 90% while increasing production by around four times. Annual production has also increased – from between 120 and 160 tons to between 250 and 270 tons. This system has a faster payback rate as well, with the growth cycle decreasing to 35 days from seed to full plant.

Increased efficiency and higher crop rates will prove to be extremely beneficial shortly for India. As India turns towards a “green revolution,” it will soon be able to mitigate the hunger and better produce agriculture despite water shortages. Hydroponic farming continually updates its mechanisms to be more up with times, and a future could see it combining with rises in smart technology and agriculture.