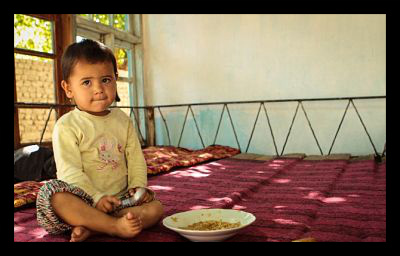 Hunger in Tajikistan is a major challenge. The World Food Programme reports one third of the country is affected by food insecurity, while the World Bank casts Tajikistan as the poorest former Soviet country in the Central Asian region. Only seven percent of the land in Tajikistan is capable of producing food, and that number is reduced by consistently harsh winters. Low-income combined with reduced access to food means thousands in Tajikistan go hungry.

After achieving independence from the Soviet Union, Tajikistan fell into civil war in the 1990s and the result was high levels of hunger and poverty that permeate the country to this day. AnneMarie van den Berg is the Deputy Country Director in Tajikistan for the WFP. She explains the WFP sponsored school feeding programs which combat hunger in Tajikistan.

“Tajikistan is a landlocked country and a net importer of food, which means that the country has been particularly hard hit by the high food and fuel prices,” AnneMarie describes why Tajikistan is suffering.

The effect has not only been higher nourishment levels among the children, but also higher concentration and school performance. Many children come to school without having had anything to eat, and find it difficult to maintain focus throughout the day. Both teachers and parents agree the hot meals provided by the WFP improve the children’s education quality.

The school feeding program directly impacts the lives of children such as Matona, age 10, and her brother Hofiz, age 9. Matona and Hofiz live in Kalai-Sheikh, a village in eastern Tajikistan. On March 21 the children, with the rest of the country, celebrate Navruz, the Central Asian New Year. They are particularly excited about the traditional Navruz dish, Sumalak. In school, Matona and Hofiz water wheat seeds on metal plates and watch as they grow into green shoots.

“The greatest joy of all for Mastona and Hofiz on this holiday is the return of their father, Firuz Bekov, from Moskow. Firuz is one of the half-million Tajik migrants in Russia working as laborers to send money home to their families,” writes the WFP.