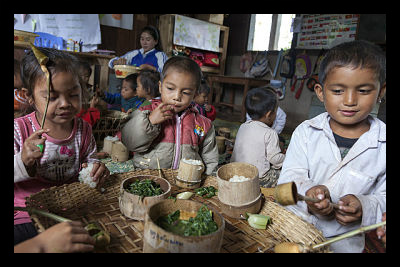 Since 1990, hunger in Lao People’s Democratic Republic, or PDR, has dropped from 34.5 percent to 20.1 percent in 2014. Though this decline of over 14 percent is promising, Lao PDR remains one of the world’s hardest hit countries by poverty. Citizens, mostly in northern and rural provinces, suffer from malnutrition, stunting and what the International Food Policy Research Institute, or IFPRI, calls “hidden hunger.”

Child nutrition is significantly lacking in Lao PDR. Forty-four percent of children are stunted due to poor diets that are lacking in key nutrients, including vitamin A, iodine, healthy fats and protein. As a result, over 40 percent of children in Lao PDR are anemic. The problem of “hidden hunger,” or a pronounced deficiency of key nutrients in childhood, has long term effects on the brain and the physical development of a child.

Lao PDR has the second highest rate of poverty in Southeast Asia, after Timor-Leste and continues to deal with gaps in its economics and wealth distribution. According to the IFPRI, Lao PDR ranks 61 out of 76 countries facing extreme hunger, with the country ranking at 76 being the most affected. Poverty and extreme hunger remains alarming in rural regions of the country, where access to healthcare and adequate nutrition remains scarce.

For example, in the province of Houaphan, 50.5 percent of the population faces extreme poverty. Those who live in this province often depend on agriculture to work and eat; however, the region is susceptible to natural disasters and wavering weather conditions, causing productivity to be low.

Recognizing the impact of climate and environmental factors on the nutrition of individuals, the government of Lao PDR launched the National Nutrition Strategy, aimed at addressing the causes of malnutrition, hunger and economic disparity. In conjunction with the U.N.’s Food and Agriculture Administration, this strategy will tackle hunger at its most basic causes.

The FAO said, “To address the immediate causes (at the individual level), the focus will be on improving nutrient intake and reducing infectious diseases that affect the biological utilization of food.”

As the completion of the Millennium Development Goals quickly approaches, Lao PDR is still not quite on track when it comes to meeting them. Resources are needed to complete these goals and not enough are being provided to Lao PDR that will improve overall development.

Lao PDR depends largely on agriculture and farming, yet those regions are affected by poverty and lack the resources to contribute to the nation’s economic stability. It is in the nation’s best interest that the government develop those programs that focus on educating rural families on sustainable farming practices and how to effectively maintain agriculture and livestock in the face of climate change, so that poverty will give way to sustainability.