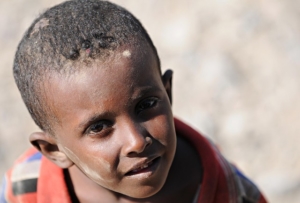 Djibouti is a small country on the Eastern coast of Africa populated by malnourished people. Because of its location, Djibouti is a shipping hub for Eastern Africa, and so it has a large urban population. Still, a World Food Programme Emergency Food Security Assessment in 2012 found that three-fourths of assessed households were “severely or moderately food insecure.”

In rural areas, where one-third of Djibouti’s population lives, there is a severe hunger crisis. One in five children aged one to four  years is malnourished and, in the rural areas, about 70,000 people were food insecure in 2012. In the slums, Arhiba and Balbala, there is a high rate of child mortality from malnutrition.This is in part due to the fact that the country has very little natural resources and there have been recurring severe droughts in the region.

Additionally, in recent years Djibouti suffered from a cholera epidemic. The droughts have damaged food production from crops and livestock in rural areas, and because the rural villages are spread out across the country, it is difficult for aid organizations to send food and healthcare to each community.

Many rural families have moved to cities in search of work and a better life. However, work is often difficult to find and, with more people migrating to the cities, the unemployment rate has increased quickly. Other rural families are fleeing to the slums to escape the harsh conditions of rural life.

Most households are receiving assistance, without which they could not survive. Fewsnet found in a 2012-2013 report that, in some areas, “households are marginally able to meet minimum food needs only through accelerated depletion of livelihood assets and adoption of unsustainable coping strategies such as charcoal sales.”

Prices and unemployment are rising as the droughts continue. The people of Djibouti need strategies for clean water, agriculture, health and nutrition. Until these needs are met, World Food Programme, Action Against Hunger and other organizations and governments are working to provide citizens with basic needs and helping the government develop programs for sustainability.