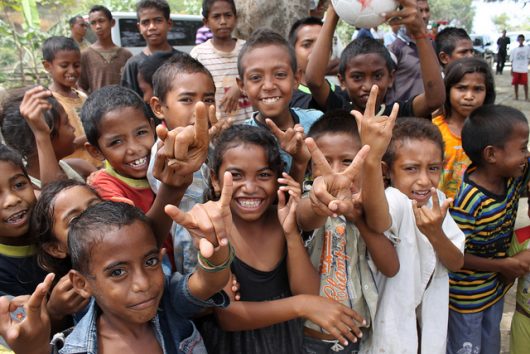 Timor-Leste, also known as East Timor and officially known as The Democratic Republic of Timor-Leste, is a sovereign state made up of a small cluster of islands in maritime Southeast Asia. After gaining independence from Portugal in 1975, Timor-Leste struggled through a quarter of a century under occupation, mass conflict and United Nations transition before finally being granted full independence in 2002.

As a result of the struggle Timor-Leste faced while gaining independence, the country was left with little infrastructure, an unstable economy and widespread poverty. Due to the country’s high instability, Timor-Leste is one of the most malnourished countries in the world. This results in a lack of food security, lack of hygiene and sanitation and an increase in poverty.

In 2014, the Humanitarian Aid Relief Trust (HART) began sending regular humanitarian aid to Timor-Leste. HART is a small aid organization originally founded by the United Kingdom but has since branched out into Australia and the United States. The aid organization focuses on working with communities in conflict zones, post-war zones or areas were people are exploited for cultural or political reasons.

On World Food Day 2014, HART released a detailed briefing on malnutrition and its consequences in Timor-Leste, such as high infant and child mortality rates. Shortly after releasing this briefing, HART worked with its partner, HAIM Health, to create programs and teaching centers to better educate the Timorese on proper nutrition. Programs focus on understanding nutrition, a balanced diet, preparing and cooking food and healthy sanitation practices. HAIM Health also follows up with the families enrolled in its education programs and has an 80 percent success rate of children gaining or sustaining weight.

Humanitarian aid to Timor-Leste does not stop with HART and HAIM Health. The Department of Foreign Affairs and Trade (DFAT) of the Australian government signed the East Timor Strategic Planning Agreement for Development in 2011, which establishes a shared vision of economic stability and growth between Australia and Timor-Leste. Since the signing of this agreement, Timor-Leste has seen many improvements in its development and further success toward a stable economy. In 2017-18 alone, Australia is expected to give approximately $96 million in humanitarian aid to Timor-Leste.

Thanks to Australia’s humanitarian aid to Timor-Leste, the Timorese have already seen positive results, including more than 40,000 people being provided the education and skill set needed to join the growing workforce. Also, over 21 thousand people now have access to clean water and hygiene programs and over 90 percent of primary schools now have a new and innovative curriculum, geared toward giving the students the skills they need to succeed.

Despite these improvements from humanitarian aid to Timor-Leste, the country still has a lot of room for improvement. The poverty rate in 2014 was 41.8 percent, which is still very high. With this groundwork laid, the Timorese will be able to build a brighter and more stable future.

Solar Energy in Zambia Will Help Bring People Out of Poverty Credit Access in Cuba: Cuentapropistas Are in Need
Scroll to top