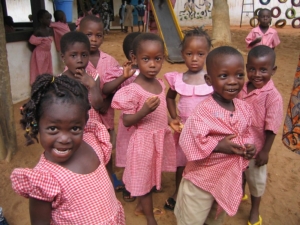 Between Ghana and Benin lies Togo, a small country in West Africa, composed of 41 different ethnic groups. With a current population of 8.8 million, it is estimated that nearly half of Togo’s population falls below 18 years of age. Unfortunately, Togo is also known as a major hub for human trafficking operations, as a source, transit and destination for victims.

Tragically, the western border of the Plateau region is often used by traffickers because it provides easy access to major transportation routes between Lomé and Accra. Reports indicate that most Togolese trafficking victims are children who become subjected to either forced labor or prostitution. NGOs and government officials report that devissime markets, meaning ‘small girls markets’ or ‘child markets’ exist in Lomé and elsewhere in the country.

The trafficking networks in Togo are predominantly community-based and organized loosely by local actors. Often, the traffickers visit rural areas in the north and central regions of Togo. They usually target impoverished families in need of money. Reports indicate that the traffickers promise the parents employment for the children and offer an advanced payment. Then, they transport the minors to Lomé, where the children become immersed in forced labor and sex markets. COVID-19 travel restrictions economically hindered Togolese families in the service and retail sectors, leaving them even more vulnerable to exploitation. As a result, the majority of trafficking victims are children from economically disadvantaged families.

In recognizing the prevalence of human trafficking across the globe, Congress passed the Victims of Trafficking and Violence Protection Act of 2000, establishing guidelines and anti-trafficking policies in order to prevent trafficking, protect trafficking victims and prosecute traffickers. Togo is ranked on the Tier 2 watchlist because the government does not meet the minimum standards for eliminating trafficking.

Unfortunately, Togo’s government has not updated its anti-trafficking National Action Plan NAP since 2008. However, in 2020, Togolese officials finalized Togo’s five-year NAP on child labor which partially addresses human trafficking in Togo. Furthermore, the 2022 Trafficking in Persons Report from the U.S Department of State cites that Togolese authorities have prosecuted and convicted more traffickers than in previous years. Togo’s government has also continued an awareness-raising campaign and established a national anti-trafficking committee to coordinate efforts.